Inter Milan secured a 3-1 win over Genoa in to move up to ninth place in Serie A. 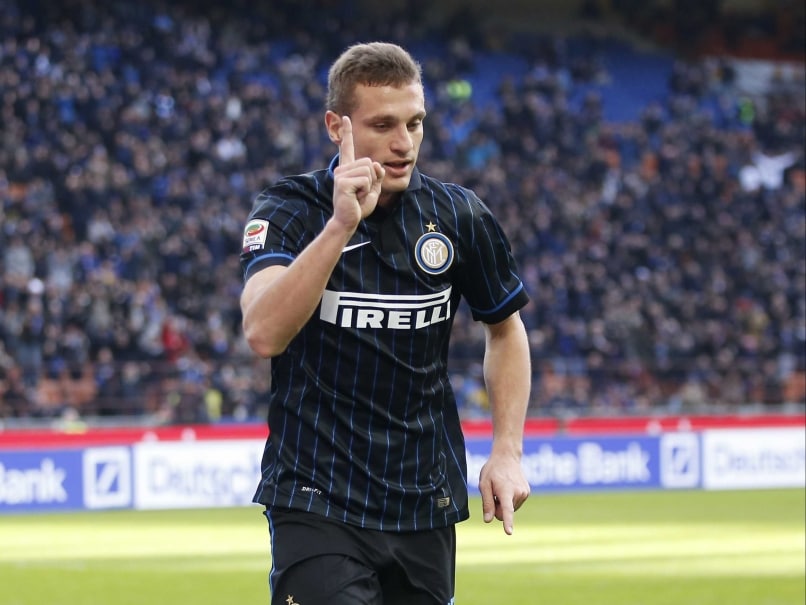 Former Manchester United defender Nemanja Vidic's first goal for Inter Milan secured a 3-1 win over Genoa in their Serie A clash on Sunday as on-loan Arsenal forward Lukas Podolski made his first start for the hosts.

Genoa, looking for their first win in four games, gave the hosts a late scare when Armando Izzo bundled home in the 85th minute to reduce the arrears after Rodrigo Palacio and Mauro Icardi had given Inter a 2-0 lead.

But Vidic, the subject of criticism earlier this season for a string of defensive blunders, secured Inter's first win of the year to move Roberto Mancini's side up to ninth place ahead of the rest of the weekend fixtures.

Inter are now 15 points behind champions and leaders Juventus, but just five points behind third-placed Lazio and Napoli, in fourth, ahead of their respective games against Roma and Juventus.

With playmaker Mateo Kovacic left out of the squad, Mancini ditched his 4-3-1-2 for a 4-2-3-1 with Podolski, Palacio and Hernanes playing behind lone striker Icardi.

But former Manchester City handler Mancini told Sky Sport: "I'm satisfied with the result and our first half. With the second half, no, although this was almost expected because the three guys playing behind Icardi are still not in top condition.

"The lads are working hard, but one victory is not going to change our progress substantially. Today it was important to win, but we still have improvements to make."

On what was Podolski's full Serie A debut and only days after Inter secured Bayern Munich's Swiss international midfielder Xherdan Shaqiri on a four-and-a-half-year deal, Inter never looked in danger.

Icardi should have scored in the second minute but saw his shot saved by Mattia Perin at full stretch.

Genoa threatened at the other end where Samir Handanovic got down low to block from Luca Antonelli.

Inter took the lead in the 12th minute when a cross found Icardi in acres of space just inside the area.

Although Perin did well to block the striker's shot on the turn, Palacio raced in to fire the rebound into the back of the net.

Icardi grabbed his 10th goal of the campaign minutes before the interval with a glancing free header from a Hernanes corner.

Genoa coach Gianpiero Gasperini later accused the Argentinian of shoving off his marker: "The Icardi goal should not have stood. The shove was evident."

Genoa suffered a blow eight minutes after the restart when Alessandro Matri was forced off with an apparent right calf problem and replaced by Juraj Kucka.

However the setback did little to quash the visitors' resolve.

After Perin came out bravely to block from Icardi at the near post, Inter took their foot off the pedal for a 15-minute spell.

A great Genoa build-up saw Handanovic pull off a fine one-handed save to stop Iago Falque's curling shot from the right edge of the area while Antonelli headed inches over the crossbar from a free kick to the right of the area on the hour mark.

Inter's defence went to sleep moments later when Maxime Lestienne, unmarked to the left of goal, smacked the ball off the crossbar with Handanovic rooted to the spot.

Genoa's efforts eventually paid off, Izzo grabbing his first goal in Serie A six minutes from time when he pounced on the rebound from Tino Costa's angled drive as Inter launched futile claims for offside.

Comments
Topics mentioned in this article
Nemanja Vidic Inter Milan Football
Get the latest updates on India vs Australia and check out  Schedule, Results and Live Score. Like us on Facebook or follow us on Twitter for more sports updates. You can also download the NDTV Cricket app for Android or iOS.