Iceland became the smallest country to advance to the FIFA World Cup finals. 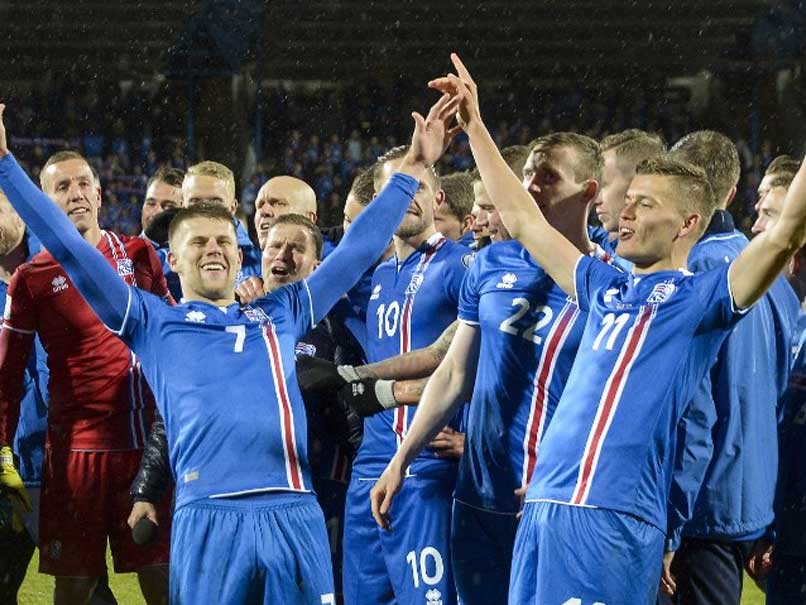 Iceland players celebrate after securing their spot in the 2018 FIFA World Cup to be held in Russia.© AFP

Iceland qualified for the FIFA World Cup for the first time after beating Kosovo 2-0 on Monday, while Serbia clinched a spot at next year's finals with a 1-0 win over Georgia. Everton midfielder Gylfi Sigurdsson and Johann Gudmundsson scored in Reykjavik as Iceland, with a population of just 330,000, became the smallest country to advance to the World Cup finals. It is the tiny northern European island nation's second successive appearance at a major tournament after their shock win over England in a surprise run to the Euro 2016 quarter-finals.

"I thought after Euro 2016 that the hardest thing would be to motivate ourselves again," said Iceland coach Heimir Hallgrimsson. "The hardest thing was to get going again after our massive party in France.

"And what's more in a group contested between Croatia, Turkey, Ukraine and Finland.

"The success is not an end in itself but a long journey towards a final destination."

Andrej Kramatic struck twice in the second half to send Croatia into next month's play-offs as Zlatko Dalic took charge of his first match following the 1-1 draw with Finland that prompted the dismissal of Cacic.

Aleksandar Prijovic scored after coming on as a second-half substitute to cement Serbia's place in Russia, ending an eight-year major finals absence.

Prijovic struck the winner on 74 minutes in Belgrade as Serbia finished top of Group D, with the Republic of Ireland heading to the play-offs after a 1-0 victory over Wales in Cardiff.

"I think we deserved this, although it turned out that the last step was the most difficult one, but we succeeded," coach Slavoljub Muslin said.

Prijovic said the goal was the most important in his career.

"It was a dream since (my) childhood to score an important goal for the state," he said.

James McClean broke Welsh hearts with a thunderous 57th-minute strike to keep Irish dreams alive as they leapfrogged their opponents, without the injured Gareth Bale, into second place.

Ireland remain on course for a first World Cup finals appearance since 2002, as surprise Euro 2016 semi-finalists Wales saw their dream of a first trip to the tournament since 1958 turn to dust.

"The players were magnificent playing away from home at a very good Welsh side. To win on their territory was a great result for us," Ireland manager Martin O'Neill told Sky Sports.

"We are in the play-offs. Whenever the draw is made we will take our chance."

Wales manager Chris Coleman admitted the consequences of a first competitive home defeat in four years were tough to digest.

"My players have given everything but it wasn't enough in the end to get over the line," he said. "It will hurt for a bit but you learn from defeat and we will learn from tonight."

Asier Illarramendi netted the only goal in Jerusalem as Spain completed their successful qualifying campaign with a 1-0 win over Israel, while Antonio Candreva grabbed a second-half winner for Italy in a 1-0 victory away to Albania in Group G.

Italy will be the top seeds for the November play-offs, the draw for which is made in Zurich on October 17.

Comments
Topics mentioned in this article
Iceland Serbia Croatia Gylfi Sigurdsson Football
Get the latest updates on ICC T20 Worldcup 2022 and CWG 2022 check out the Schedule, Live Score and Medals Tally. Like us on Facebook or follow us on Twitter for more sports updates. You can also download the NDTV Cricket app for Android or iOS.