A bright India provided hope for a brighter future but their dream ended in a heartbreak following a 1-2 defeat to Colombia on Monday in the FIFA U-17 World Cup, leaving the many heads totting the stands teary-eyed. 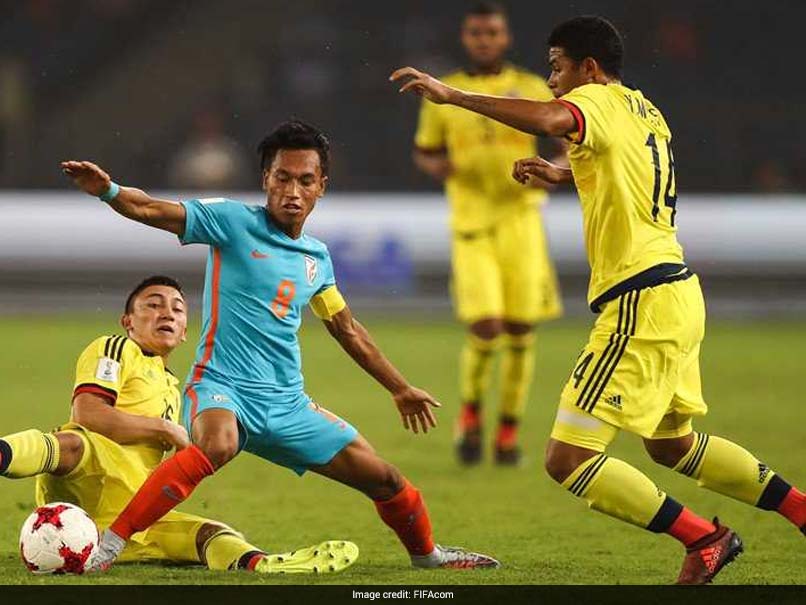 For India, Jeakson Thounaojam scored the lone and first ever goal at a FIFA World Cup.© Twitter

So near, yet so far. India's striker Jeakson Thounaojam created hopes for the Indian flag to fly high in the 82nd minute of the game by scoring an equaliser against Colombia in India's second group match of the FIFA U-17 World Cup at the Jawaharlal Nehru Stadium in New Delhi. To the surprise, and delight, of the sizeable crowd at the stadium, Jeakson became the first ever Indian player to score a goal in the World Cup. But, the dream ended in a heartbreak following a 1-2 defeat to Colombia on Monday leaving the many heads totting the stands teary-eyed.

When defensive midfielder Jeakson Thounaojam neutralised Colombia's lead, India were moments away from securing their maiden draw in only the second attempt. But that was not to be as Juan Penaloza (83rd) scored his second of the night on the counter to leave the home players, as well as the crowd, crestfallen Nonetheless, a charged up India produced one of their finest performances before going down in front of disappointed but proud group of spectators, who witnessed a historic first ever FIFA World Cup goal.

India scored when Jeakson, the tallest player in the side, headed in a Sanjeev Stalin corner, sending the whole stadium into a state of delirium.

The move to make four changes by coach Luis Norton de Matos proved to be a wise one as the taller Indian players ensured they were equal to the task, when it came to the aerial battle against the well-built Colombians.

It was a very different India that turned up after the 0 -3 loss to USA three nights ago.

They were on the ball from the word go and even though the Colombians had more of possession, India very much managed to make their presence felt.

There was heightened activity in the Colombian box, with Ninthoinganba Meetei initiating surging runs down the right flank, each steps raising hopes for the improbable. This was in the in the beginning of the Group A match.

To the surprise, and delight, of the sizeable crowd at the Jawaharlal Nehru Stadium, India had Colombia at their mercy in the 16th minute.

But, to the disappointment of the thousands occupying the stands, Abhijeet Sarkar, having found a clear view of the goal, shot over.

India's hopes went up in smoke after coming agonizingly close to scoring their first ever World Cup goal. In the cut-throat world of international football, Colombia may be many, many rungs above India, but the host nation had the momentum on this night. And they used it to rattle the Colombians on a few occasions.

India came close again, closer would be appropriate, but Rahul Kanoly's volley thudded against the post instead of finding the back of the net. The pain on coach Luis Norton de Matos was palpable as the Indians once fumbled after coming so close.

With both teams failing to break the deadlock, India went into the breather with their heads held high, but cursing their fate.

The two chances would haunt them for long. Hitting the framework, they say, is bad omen in football and the saying stayed true as Colombia broke the deadlock, and Indian hearts, with a fine strike after the change of ends.

It was Juan Penaloza who put Colombia ahead in the 51st minute. The midfielder ran to the edge of the box and kept the Indian defenders guessing with his deft footwork, before unleashing a rasping left-footed volley to the bottom left corner of Dheeraj Singh's post.

The assist was made by captain Thomas Gutierrez, and as the ball found the back of the net, the Latin Americans ran towards their dugout and celebrated. They were relieved to have opened their account after suffering a reverse against Ghana in the opening encounter.

India's number one goalkeeper, on this occasion, had no chance even though he had another brilliant night under the bar pulling off a couple incredible saves, showing nice anticipation.

Down by a goal in this crucial encounter, India looked eager to respond as Meetei delivers a cross from the right flank, only to find Rahul Kanoly's shot wide off the target.

Comments
Topics mentioned in this article
India Football Team Football
Get the latest updates on India vs South Africa and check out  Schedule, Results and Live Score. Like us on Facebook or follow us on Twitter for more sports updates. You can also download the NDTV Cricket app for Android or iOS.