Mohun Bagan will be rechristened ATK-Mohun Bagan from next season after the iconic club merged with ATK FC on Thursday. 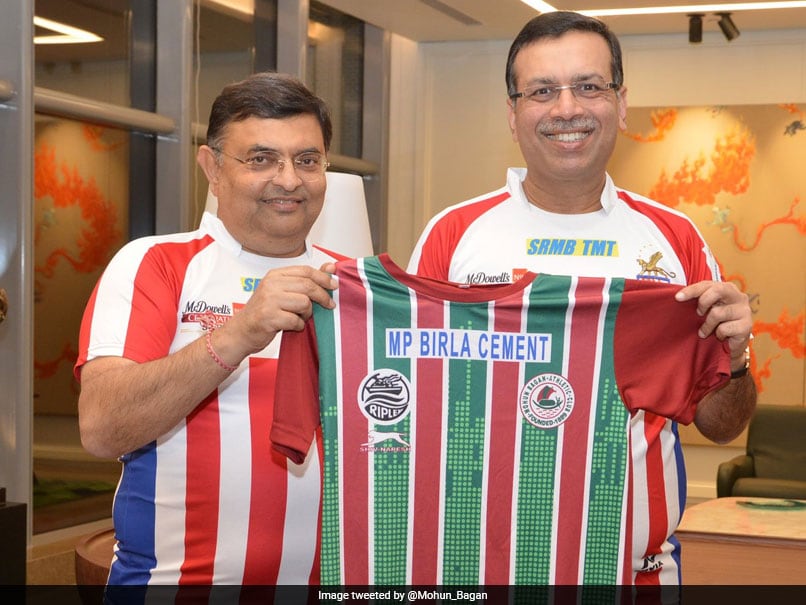 The two sides will play separately in the current I-League and ISL seasons.© Twitter

Mohun Bagan will be rechristened ATK-Mohun Bagan from next season after the iconic club merged with ATK FC on Thursday by selling the majority stake to the owner of the two-time Indian Super League winners. The merged club will come into existence in June and will compete in the ISL 2020-21. The two sides will, however, play separately in the current I-League and ISL seasons. As per the deal, the RP-Sanjiv Goenka Group, who are the principal owners of ATK, will acquire majority shareholding of 80 per cent in Mohun Bagan Football Club (India) Private Limited.

Talking exclusively to PTI after the merger, RPSG Group Chairman Sanjiv Goenka said the merged club will be named ATK-Mohun Bagan and he would ensure that the identities of both Mohun Bagan and ATK remained intact.

"The name of the new club would be ATK-Mohun Bagan. Identities of both Mohun Bagan and ATK will remain intact," Goenka said.

"Mohun Bagan now belongs to me. For me, what's the difference between Mohun Bagan and ATK? We will see what's the best and then take a call. I've always said Mohun Bagan is a Dada club for us (big brother)," he said when asked what would be the jersey colour and logo.

"It's not my call. It's a call that the operating management will take. Let the Board take a call, I will be happy with anything. Both are my jerseys today. It does not matter to me whether it's this or that."

He, however, hinted that merged club may keep both the jersey colours of green-and-maroon (Mohun Bagan) and red-and-white (ATK) for home and away matches.

"We have not decided the colours of jersey. It's not relevant right now. The operating team will take a call on all this. As it is, we have two jerseys -- one for home and one away. Is it a point even worth fighting over?" he asked.

Asked what would be the team management like, Goenka said the current ATK coach Antonio Habas, under whom they won the inaugural ISL title in 2014, has a contract for two seasons running till 2020-21.

"Of course, Habas is coach for two years. We have not yet discussed all this. But (ATK's youth development head) Sanjoy Sen was also Mohun Bagan coach. We will see how it goes," he said when asked whether current Mohun Bagan coach Kibu Vicuna will part ways.

"This (derby) is on Sunday. We are all looking forward to it," he said.

"Mohun Bagan is a legacy club, it has got history and tradition. And we are a group that used to dealing with legacies like Saregama, HMV, Spencers, CESC -- all 100-year-old companies. With folded hands and open arms, we welcome Mohun Bagan into the RPSG family. We are honoured that they are a part of the family," he said.

Announcing the merger, Goenka said: "Personally, it's an emotional reunion for me as my father late R P Goenka was a member of Mohun Bagan.

"The new football club will have brand names of ATK and Mohun Bagan. This move will see the two football clubs coming together into a new merged identity to compete in the rapidly growing professional Indian football landscape."

He said the merger of two powerhouses from West Bengal holds an immense potential to take forward the rich football legacy of the state.

"Kolkata, popularly known as the mecca of Indian football, has ruled the sport for decades. The deal further promises to deliver a new and exciting element of football to the Indian fans," Goenka said in a statement issued by the ISL.

Atletico de Kolkata Football
Get the latest updates on Fifa Worldcup 2022 and check out  Fifa World Cup Schedule, Stats and Live Cricket Score. Like us on Facebook or follow us on Twitter for more sports updates. You can also download the NDTV Cricket app for Android or iOS.