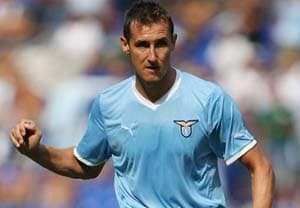 Klose, 34, netted five goals in Lazio's 6-0 demolition of Bologna in Serie A on Sunday to signal that he is back to his best after a knee injury meant his last goal for the Rome-based side was back on December 15.

"You don't experience days like these too often, so I'll enjoy the feeling," he said having needed just over an hour to score his record haul at home to Bologna.

"Without my teammates, none of this would have been possible."

He is the first Lazio player to score five goals in an Italian league game and equals the Serie A record, becoming the first striker to achieve the feat since Roberto Pruzzo for Roma back in 1986.

Klose is involved in the Italian Cup final on May 26, when Lazio face capital neighbours Roma, but could still feature in the plans of Germany coach Joachim Loew for a tour to the at the end of the month.

Germany play friendlies against Ecuador in Boca Raton, Florida, on May 29 and against the USA in Washington DC on June 2, and Loew is already without several stars from both Champions League finalists Bayern Munich and Borussia Dortmund.

After the tour, Loew's team host Paraguay in August and Austria in a World Cup qualifier in September.

With 126 appearances and 67 goals for Germany, Klose is just one short of Mueller's record of 68 goals, scored in 62 games for West Germany.

Mueller's last goal in the German shirt came on July 7, 1974 when he scored the winner in the 2-1 victory over the Netherlands in the World Cup final.

Comments
Topics mentioned in this article
Football Lazio Miroslav Klose
Get the latest updates on ICC T20 Worldcup 2022 and CWG 2022 check out the Schedule, Live Score and Medals Tally. Like us on Facebook or follow us on Twitter for more sports updates. You can also download the NDTV Cricket app for Android or iOS.