Milan prepare for life without Ibrahimovic

Serie A leaders AC Milan enter the final quarter of the season with a severe handicap for the next three games as star forward Zlatan Ibrahimovic will be watching on from the stands. 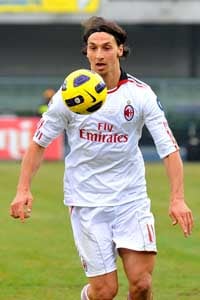 Serie A leaders AC Milan enter the final quarter of the season with a severe handicap for the next three games as star forward Zlatan Ibrahimovic will be watching on from the stands.

A moment of madness against rock-bottom Bari last week, when he slapped Marco Rossi in the ribs, earned the big Swede a straight red card and three-game ban.

He will miss Saturday's trip to Palermo but then perhaps crucially the top of the table Milan derby against Inter as well.

Without their top scorer and attacking focal point, Milan will have to show greater variety than they have otherwise demonstrated throughout much of this season, where Ibrahimovic has time and again made the difference.

However, he has scored only once since the end of January, and that a penalty, and some may feel that Milan have already been coping admirably without their talisman's usual input.

But now it will be up to the likes of Pato, Antonio Cassano and Robinho to step up to the plate and show their worth.

Pato, for one, seems to be relishing the opportunity, particularly given a stop-start season in which he hasn't always been first choice.

"Ibrahimovic is vital for us, it's a serious loss but we have great players who can play well," said the young Brazilian, who expects to play alongside Cassano in Sicily.

"I like playing with him, it's been a while now that I've wanted to (start a game) with him and now I can do so.

"I'm happy, all I want is to play, with or without Ibrahimovic.

"I've been here for four years, I can play as the frontman or off the frontman, it depends on the gaffer's choice.

"I just want to show what I'm worth. I've been injured a lot but I've never thought that I couldn't contribute something."

Pato also played down the embarrassing home draw against rock-bottom Bari last weekend, in which they needed a late Cassano goal when they were already down to 10 men to salvage a point.

"We tried to do well but they played better than us, these things can happen, we have to forget about it and look forwards," he added.

"We're still five points clear and we're thinking only about ourselves."

However, they too stuttered last weekend, drawing away to second-bottom Brescia and they also played a mentally draining Champions League game in Munich in midweek.

However, president Massimo Moratti has been trying to motivate his side while aiming a dig at his rivals, pointing to the deal he made with Barcelona a little over 18 months a go that brought Samuel Eto'o and 50 million euros to Inter with Ibrahimovic heading in the other direction.

Eto'o has bagged 31 goals already this season while Ibrahimovic was shipped off to Milan after just one season in Catlunya to make way for David Villa.

"Eto'o's fantastic. I don't want to take anything away from Ibrahimovic but the Eto'o deal was wonderful, Samuel really is an amazing striker," he said.

The other team still in the scudetto running is Napoli, who sit six points back from Milan and host Cagliari on Sunday night.

However, they cannot afford any more slip-ups if they want to stay in the hunt right to the end, although they were boosted by the return from suspension of Ezequiel Lavezzi in the 3-1 win at Parma last week.

Comments
Topics mentioned in this article
Football AC Milan Zlatan Ibrahimovic
Get the latest updates on ICC T20 Worldcup 2022 and CWG 2022 check out the Schedule, Live Score and Medals Tally. Like us on Facebook or follow us on Twitter for more sports updates. You can also download the NDTV Cricket app for Android or iOS.