Mesut Ozil dropped a bombshell by announcing his retirement from Germany duty and accused the president of the German FA, Reinhard Grindel, of racism. 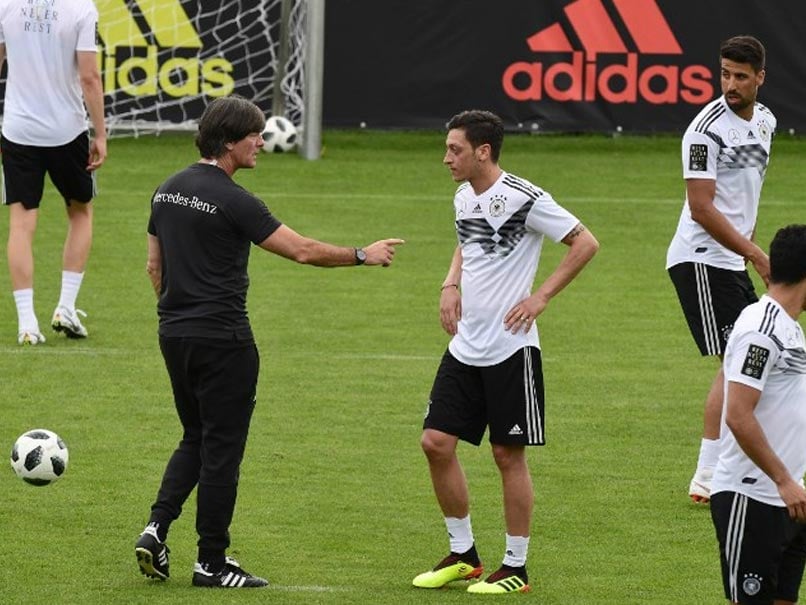 Joachim Loew was on holiday in Sardinia when news of Mesut Ozil's retirement broke on Sunday.© AFP

Mesut Ozil's shock retirement from international football caught Germany head coach Joachim Loew by surprise, it emerged on Tuesday. Loew was on holiday in Sardinia when news of Ozil's retirement broke on Sunday and he only found out when the Arsenal midfielder posted statements on Twitter and Instagram. "Neither the national coach nor I were informed in advance," Loew's agent Harun Arslan confirmed to German daily Bild. Ozil, 29, dropped a bombshell by announcing his retirement from Germany duty and accused the president of the German FA, Reinhard Grindel, of racism.

"In the eyes of Grindel and his supporters, I am German when we win, but I am an immigrant when we lose," Ozil wrote in his lengthy farewell statement.

Ozil, a 2014 World Cup winner was born in Gelsenkirchen but has strong Turkish roots.

The German Football Association (DFB) on Monday refuted Ozil's allegations of racism, but the fiasco has damaged the governing body's reputation in football-mad Germany.

A survey of 5,000 Germans by t-online.de showed 49.7 percent think Grindel should resign over the saga.

Ozil says he is quitting over the furor caused by his meeting with Turkish president Recep Tayyip Erdogan on the eve of the World Cup as Grindel failed to back him amidst the criticism.

When Germany crashed out of the World Cup in Russia after the knock-out stage, Ozil was made a scapegoat by some pundits in a group of senior players who failed to perform.

He was dropped after the shock 1-0 defeat to Mexico, sitting out the last-gasp 2-1 win over Sweden, but was one of several stars who played poorly in the 2-0 defeat to South Korea which confirmed Germany's early World Cup exit.

The Arsenal midfielder is walking away after nine years as one of Loew's most trusted players.

The news that he had no warning is surprising as Arslan has a co-operation agreement with Ozil's advisor Erkut Sogut, who only warned the DFB that a statement would be released on Sunday.

After 23 goals and 40 assists in 92 appearances for Germany, the loss of Ozil is a blow to Loew, who deployed the Arsenal midfielder as his main playmaker.

Germany's first game after the World Cup debacle is against newly-crowned world champions France in the new Nations League tournament on September 6 in Munich.

With Ozil gone, Loew will have to find his replacement with Paris Saint Germain's Julian Draxler or Borussia Dortmund star Marco Reus as the leading candidates.

"Mesut Abi ('brother' in Turkish), your technique on the ball has opened the door to the national team for players like me," wrote Draxler on his Instagram account along with a picture of him and Ozil.

"Thank you for everything you've done for German football. You can be proud of your many achievements."

However, others see Ozil's retirement as no great loss for Germany.

"He has not put in performances that can help the national team over the last 18 months to two years, nor was he convincing at the World Cup in his two outings," ex-Germany captain Lothar Matthaeus told Sky Sports.

"Now there is the chance for a younger, maybe even a better player" to come into the Germany side, Matthaeus added.

Erdogan meanwhile announced on Tuesday that he had contacted Ozil to praise his "patriotic" decision in standing down from the national team.

Arsenal Mesut Ozil Joachim Loew Football
Get the latest updates on ICC T20 Worldcup 2022 and CWG 2022 check out the Schedule, Live Score and Medals Tally. Like us on Facebook or follow us on Twitter for more sports updates. You can also download the NDTV Cricket app for Android or iOS.