Milan had hoped Balotelli would return from a three-game league ban against Udinese on Saturday. 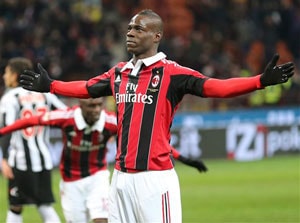 Milan had hoped Balotelli would return from a three-game league ban against Udinese on Saturday.

But after playing in Italy's final World Cup qualifier against Armenia last week the 23-year-old striker was diagnosed with a thigh problem.

Balotelli was absent for Milan's precious 1-0 win at home to Udinese and although expected to recover in time for Tuesday Galliani suggested the striker could again be sidelined when Barca visit the San Siro.

Goalkeeper Christian Abbiati, who picked up a knock hours before Saturday's game, is also likely to be missing.

"According to our medical staff, it will be difficult for Balotelli and Abbiati to be ready in time for Tuesday," Galliani was quoted as saying by Sky Sport Italia.

It means Milan will be without arguably their strongest player against the Spanish giants. Although Balotelli failed to score in a 2-0 home win over Celtic, the Italian won and scored a late penalty to secure a share of the spoils in a 1-1 draw away to Ajax.

Although Brazilian 'keeper Gabriel made his Serie A debut for Milan following Abbiati's late pull-out, he was not included in Milan's list of Champions League players as he was sidelined with injury at the time.

It means Marco Amelia is set to step in for Abbiati on Tuesday when Barca, who on Saturday settled for a scoreless draw away to Osasuna, failing to score a league goal for the first time since January 2012, will be looking for their third group win on the trot.

Comments
Topics mentioned in this article
Football AC Milan Mario Balotelli Javier Pastore
Get the latest Cricket news, check out the India cricket schedule, Cricket live score . Like us on Facebook or follow us on Twitter for more sports updates. You can also download the NDTV Cricket app for Android or iOS.