Marcus Rashford marked his Premier League debut for Manchester United by scoring in the 29th and 32nd minutes, three days after a double in the Europa League against FC Midtjylland. 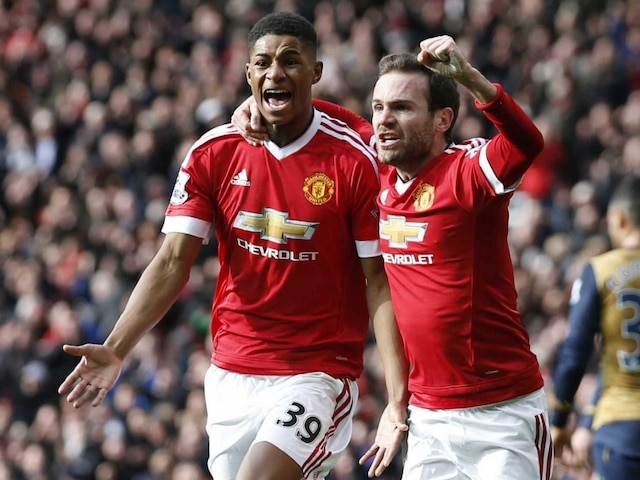 Manchester United's Marcus Rashford (left) celebrates with teammate Juan Mata after he scores the opening goal of the game against Arsenal at Old Trafford.© AP
Manchester:

The 18-year-old, who had scored twice on his debut against FC Midtjylland in the Europa League on Thursday, also set up a goal for Ander Herrera as Louis van Gaal's side closed to within three points of the Champions League places.

Arsenal, who scored through Danny Welbeck and Mesut Ozil, were left five points below leaders Leicester City, while Tottenham Hotspur moved three points above them by coming from behind to beat Swansea City 2-1.

"The experience of mine is youngsters always play well the first match," said United manager Van Gaal. "The second match is different. Marcus played well in both matches, so he is a special talent.

"The performance and the result (were pleasing), when you are playing against one of the best Premier League teams and can play with such ambition and performance."

Arsenal manager Arsene Wenger told BBC Sport: "I cannot fault our commitment and spirit and desire, but I feel we conceded too easy goals.

"I am disappointed because we lost the game, but we will focus on the next one (against Swansea on Wednesday). This is a fight where you go to the next one and aim to come back even stronger."

The extent of United's injury problems was laid bare at Old Trafford by a starting XI that saw midfielder Michael Carrick line up at centre-back, while Manchester-born starlet Rashford led the line in the absence of injury victims Wayne Rooney and Anthony Martial.

Arsenal, who made three changes from their 2-0 Champions League defeat by Barcelona, created the first chance, Ozil freeing Nacho Monreal for a shot that the fit-again David de Gea raced out to block, but it was the hosts who drew first blood in the 29th minute.

Gabriel, brought in for Per Mertesacker, failed to make proper contact as he attempted to clear Guillermo Varela's inviting right-wing cross and Rashford nervelessly placed the loose ball past Petr Cech.

The United faithful rose to acclaim their new hero and they were off their feet again less than three minutes later when Rashford met Jesse Lingard's cross with a well-directed downward header.

Rashford became the third-youngest player to score a Premier League goal for United, after Federico Macheda and Welbeck, and the latter returned to haunt his former club by reducing the arrears.

In a repeat of the formula that had yielded a last-gasp winner against Leicester two weeks ago, Ozil chipped a free-kick into the box and Welbeck stooped to head home. It was the German's 18th assist of the campaign.

United lost Marcos Rojo to an apparent ankle injury early in the first half, which saw 18-year-old Dutch defender Tim Fosu-Mensah come on for his club debut.

Wenger sent on Olivier Giroud for the ineffective Theo Walcott in the 63rd minute, but two minutes later United extended their lead.

Rashford rolled the ball into the path of Herrera, whose first-time curler from outside the box was deflected past Cech by the flying Laurent Koscielny.

Ozil gave Arsenal hope with 21 minutes left, following in to volley home after De Gea had parried from Welbeck.

But the hosts held firm and Van Gaal had the home fans roaring in their seats as he mimicked a dive to fourth official Mike Dean on the touchline in protest at what he felt was a piece of simulation by an Arsenal player.

United are now three points below fourth-place Manchester City, who were contesting the League Cup final against Liverpool. 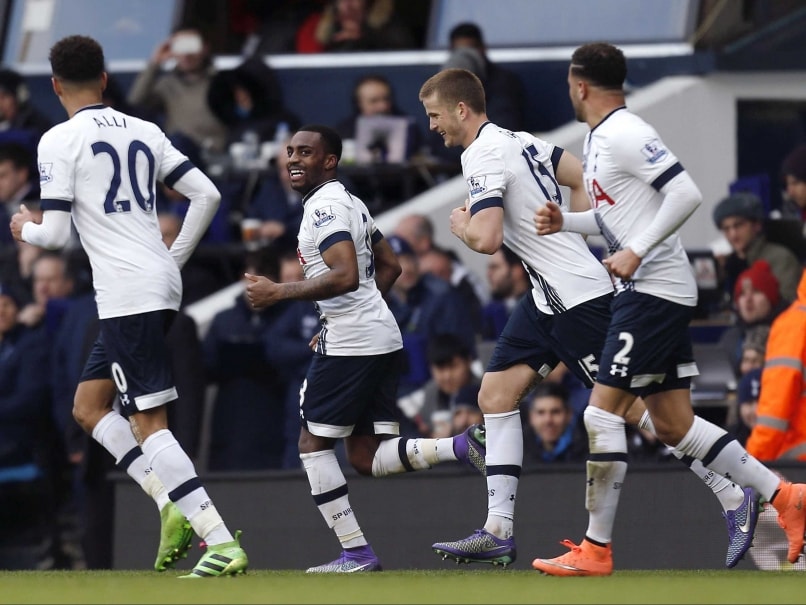 Tottenham, who began the day level on points with Arsenal, fell behind in the 19th minute at home to Swansea when Alberto Paloschi seized on Angel Rangel's deflected shot to score.

But Nacer Chadli turned in Kyle Walker's cross to equalise in the 70th minute and left-back Danny Rose completed the comeback seven minutes later when he drilled home from distance following a corner.

"Sometimes football is difficult. You play well, but find it hard to score. The good thing is that the team fight," said Spurs manager Mauricio Pochettino.

"Our mentality is to look to the next game and go step by step. Now we need to focus again."

Comments
Topics mentioned in this article
Manchester United Tottenham Hotspur Arsenal Danny Welbeck Football
Get the latest Cricket news, check out the India cricket schedule, Cricket live score . Like us on Facebook or follow us on Twitter for more sports updates. You can also download the NDTV Cricket app for Android or iOS.