Manchester United edged into the Champions League quarterfinals as Javier Hernandez's double-strike clinched a 2-1 win over Marseille in the last 16 second leg on Tuesday. 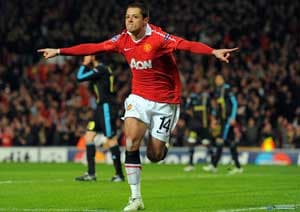 Manchester United edged into the Champions League quarterfinals as Javier Hernandez's double-strike clinched a 2-1 win over Marseille in the last 16 second leg on Tuesday.

Sir Alex Ferguson's side were far from convincing for long periods at Old Trafford, but the predatory finishing of Mexico striker Hernandez moved United into the last eight for the fifth successive year with a 2-1 aggregate victory.

This was Ferguson's 100th Champions League victory and few of the previous 99 would have caused him quite so much anxiety as this.

Marseille gave United's defence too many scares for the Scot's liking and Wes Brown's late own goal ensured a tense finish for the Premier League leaders.

Despite the latest in a long line of underwhelming displays, United are closing in on the final at Wembley and remain on course for a treble.

Ferguson admitted that he hadn't been able to relax even at 2-0 up.

"It was nervy because players kept on coming off injured," said the 69-year-old Scot.

"But I think that the experienced players like Paul Scholes, Ryan Giggs and Michael Carrick did really well for us tonight."

Regarding who they got in the quarterfinals he was pretty relaxed.

"You just take what you get.

"You never get what you wish for."

"We missed a real chance to beat an under strength Manchester United side this evening," said Deschamps, who guided Monaco to a surprise spot in the 2004 final.

"We had our chances and didn't take them and despite conceding those goals we still could have won.

"We should have done better. But at this level you need to be playing these type of matches regularly, it is a learning process."

United, held to a 0-0 draw in the first leg, tore into Marseille at the start and it took only five minutes to open the scoring as a brilliantly constructed move pierced the French defence with surgical precision.

Wayne Rooney was the architect of Marseille's downfall as he played a sumptuous pass out to Ryan Giggs on the left wing and then surged into the penalty area to take the return ball.

Rooney's instant control gave him time to assess the situation and he drilled over a low cross towards Hernandez, who timed his run perfectly to beat the offside trap and tap into the empty net.

That dream start lulled United into a false sense of security and their defence was dozing as Andre-Pierre Gignac ran onto Andre Ayew's flicked pass.

Gignac had time and space to pick his spot, yet with the goal at his mercy he tamely lofted a chip way over the crossbar.

Steve Mandanda almost gifted United a second goal as the goalkeeper's woeful clearance fell to Nani just outside the penalty area, but the winger strangely decided not to shoot and his delayed pass to Rooney allowed Marseille time to regroup and clear.

United's own frailties at the back kept Marseille in the game and Taye Taiwo was left unmarked to cross towards Souleymane Diawara, who was also unopposed as his mistimed header drifted wide.

It didn't help that right-back John O'Shea limped off with a hamstring problem and Marseille, growing in confidence, threatened again when Benoit Cheyrou tested Edwin van der Sar with a long-range effort.

Ferguson sent on Antonio Valencia in place of Nani after an hour and the Ecuador winger's volley immediately forced Mandanda into action.

Another injury, this time to substitute Rafael da Silva, forced further reorganisation in United's defence as the Brazilian was stretchered off.

Cheyrou had a golden opportunity to take advantage when he ghosted onto Remy's cross, only to shoot straight at van der Sar from close-range.

Ferguson's side made Marseille pay for their wayward finishing in the 75th minute.

Valencia played a clever reverse pass to Giggs and his low cross was met with a typically predatory finish by Hernandez.

That should have been the end of the French champions, but Brown briefly gave them hope when he headed Lucho's corner into his own net in the 81st minute.

Comments
Topics mentioned in this article
Football Wayne Rooney Chelsea Arsenal Alex Ferguson Manchester United Marseille Javier Hernandez
Get the latest updates on ICC T20 Worldcup 2022 and CWG 2022 check out the Schedule, Live Score and Medals Tally. Like us on Facebook or follow us on Twitter for more sports updates. You can also download the NDTV Cricket app for Android or iOS.