A late Pablo Zabaleta strike gave Manchester City a 1-0 win at Stoke City to progress to the 5th round of the FA Cup. 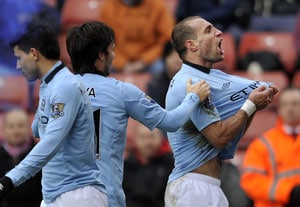 Manchester City captain Vincent Kompany has been ruled out of the Premier League champions' crucial trip to QPR on Tuesday after suffering a calf injury during his team's 1-0 win at Stoke in the FA Cup fourth round on Saturday.

Kompany was forced off after 33 minutes at the Britannia Stadium and City's assistant manager David Platt confirmed the Belgian centre-back faces a spell on the sidelines.

His absence is a major blow for City manager Roberto Mancini, who has already lost Ivory Coast defender Kolo Toure for several weeks on international duty at the African Cup of Nations.

"He (Kompany) has pulled his calf. We won't know how bad it is until the morning but there won't be any chance of Tuesday," Platt.

Despite Kompany's injury, City, who trail Premier League leaders Manchester United by five points, moved into the FA Cup fifth round thanks to a late Pablo Zabaleta goal.

Zabaleta struck from close range after 85 minutes to finish off a sweeping move and Platt was pleased with the way his team wore down their stubborn hosts.

"The pleasing thing is we battled hard, defended well and kept another clean sheet," Platt said.

"It is pleasing from that perspective and it is also pleasing to go through.

"We knew it was going to be difficult here. You know the ball is going to come in the box and you're going to have to compete for first balls, second balls all day.

"It is the way it is going to be and I thought we did it well."