Man City back on trophy trail after Europa flop

Manchester City are determined to bounce back from their Europa League flop when they face Reading in what should be a straightforward FA Cup assignment on Sunday. 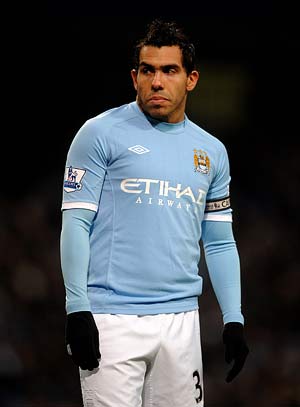 Manchester City are determined to bounce back from their Europa League flop when they face Reading in what should be a straightforward FA Cup assignment here on Sunday.

The result threatens to end City's European campaign at the first meaningful hurdle, and leaves Mancini's side looking to the FA Cup as their most likely chance of snaffling silverware this season.

According to midfielder Nigel de Jong, City's loss to Kiev underlined flaws as they seek to emerge as authentic rivals to the likes of Manchester United, Chelsea and Arsenal.

"We have a lot of individual qualities in the team but it takes time to get together as a team," he said.

"This was a good lesson for us to see how teams like this can play. We have to take that lesson into the next game."

However, De Jong's opinion of City's recent showing is not shared by team-mate Joleon Lescott who maintains that the Europa League loss will have no bearing on City's match against Reading.

"We were never going to let this performance affect us for Sunday," Lescott said. "It is a totally different game and we are playing at home.

"It is a domestic competition and this is different to Europe. They will come here and be up for the game and we have to match up.

"Of course we have to think positive.

"Even if we had won [against Kiev] we wouldn't be using the performance for Sunday. It is a totally different competition. We know that how we have to approach that game is totally different to the Kiev game."

Reading were a Premier League side just three seasons ago and they still have many players on their payroll who played for the club during their time in England's top-flight.

Although it would technically be a shock if Reading beat City, nobody was too surprised when they defeated Everton in the last round and the Madejski Stadium squad are quietly confident of producing another upset.

"All the pressure will be on Manchester City with the money they have spent and the quality players they have," defender Ian Harte said.

"We want to put on a great performance for our supporters. Then we will worry about the league after that.

"It's a massive game for the football club and everyone in the Reading area. I'm sure all out supporters will be going.

"It would be nice for Reading to get back to the Premier League, but we have to keep working game-by-game. So to play against Manchester City and their world class players should be a fantastic occasion for everybody."

City are likely to be without Mario Balotelli who suffered an allergic reaction to the Kiev pitch on Thursday but Carlos Tevez and de Jong have recovered from injuries and will start. However, James Milner (hamstring) will be missing.

Reading will be without goalkeeper Adam Federici (knee) for the trip to while Matt Mills (groin) is also a doubt.

Comments
Topics mentioned in this article
Football Inter Milan Everton Michael Barry Owens Liverpool Njazi Kuqi Newcastle United Arsenal Manchester United
Get the latest updates on ICC T20 Worldcup 2022 and CWG 2022 check out the Schedule, Live Score and Medals Tally. Like us on Facebook or follow us on Twitter for more sports updates. You can also download the NDTV Cricket app for Android or iOS.