Germany coach Joachim Loew on Thursday called up uncapped midfielders Ilkay Gundogan and Marco Reus and eight Bayern Munich players in his squad for next week's friendly against Brazil. 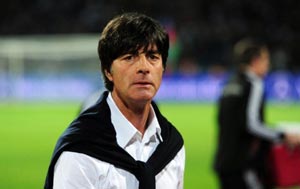 Germany coach Joachim Loew on Thursday called up uncapped midfielders Ilkay Gundogan and Marco Reus and eight Bayern Munich players in his squad for next week's friendly against Brazil.

Germany face the south American giants in Stuttgart next Wednesday and Loew has summoned up rising 20-year-old star Gundogan, who is set to make his Bundesliga debut for German champions Borussia Dortmund on Friday.

Promising 21-year-old Reus from Borussia Moenchengladbach is the other uncapped call up, but both Real Madrid stars Mesut Ozil and Sami Khedira have been left out after touring with the Spanish giants.

"I have telephoned both of them and explained why we have left them out this time," said Loew.

"After their travels to the USA and China with Real Madrid, they get back to Europe on Sunday after a 14-hour plane journey."

"Due to these pressures, it makes more sense for them to continue their preparations in Spain and we will call them up for the international matches in September."

Having transferred from Nuremberg in the summer, Gundogan is a name to watch in the German league having caught Loew's eye and has already been capped at various levels by Germany's youth teams.

"He is a technically gifted talent with a high-level of match intelligence."

"This is a good opportunity to involve him with the squad at the start of a European Championship season."

Apart from Gundogan there are very few other surprises in the Germany squad with the bulk of the Bayern team being chosen.

Stuttgart's Brazil-born forward Cacau has been called up to face the country of his ancestors at his home club while veteran striker Miroslav Klose is the only overseas player named.

The clash will be the first meeting of the two nations since June, 2005, when Brazil beat their hosts 3-2 in a Confederations Cup semi-final in Nuremberg.

In 20 meetings between the teams, Germany have won just three times, with five draws and 12 defeats.

Comments
Topics mentioned in this article
Football Germany Brazil Ilkay Gundogan Marco Reus Tennis
Get the latest updates on IPL 2020, check out the IPL Schedule for 2020 and Indian Premier League (IPL) Cricket live score . Like us on Facebook or follow us on Twitter for more sports updates. You can also download the NDTV Cricket app for Android or iOS.