Alisson is a key signing for Jurgen Klopp who was desperate for a new goalkeeper to replace Loris Karius. 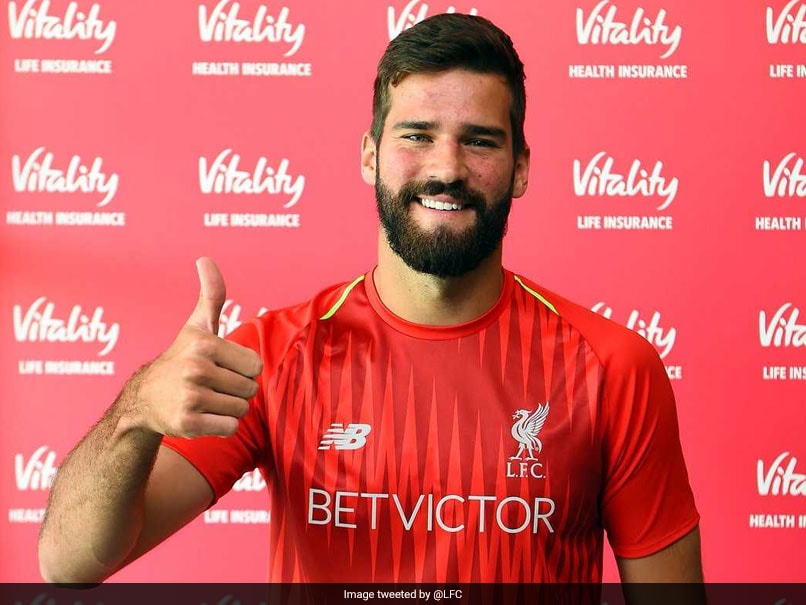 Liverpool on Thursday signed Brazil goalkeeper Alisson from AS Roma in a world record deal valued at 72.5 million euros by the Italian club. "The 25-year-old signed a long-term contract with the Reds after undergoing a medical and completing the formalities of his switch at (training centre) Melwood today," said the Liverpool website. Roma confirmed the value of the transfer for Alisson who featured at the FIFA World Cup 2018 in Russia. "ASRoma can confirm that Alisson Becker has completed his move to Liverpool, in a deal that could be worth up to 72.5 million euros," the Serie A club said on Twitter.

Alisson is a key signing for Jurgen Klopp who was desperate for a new goalkeeper to replace Loris Karius following his calamitous Champions League final performance against Real Madrid.

Chelsea were also linked with Alisson who began his career with Internacional in Brazil before moving to Roma two years ago.

"I'm really happy, it's a dream come true to wear such a prestigious shirt for a club of this size that is used to always winning," Alisson told liverpoolfc.com.

"In terms of my life and my career, it's a huge step for me being part of this club and this family. You can be certain that I'll give my all."

Alisson said that Liverpool striker Mohamed Salah -- also a former Roma player -- had encouraged him to join the Anfield giants.

"Yesterday, he sent me a text message saying: 'Hey, what are you waiting for?' As the negotiations were at an advanced stage, I replied to him straight away saying: 'Calm down, I'm on my way!'

The fee beats the previous record for a goalkeeper of 53 million euros paid by Juventus for Gianluigi Buffon in 2001 and the 40 million euros Manchester City forked out to sign Alisson's compatriot Ederson from Benfica last year.

"At one point in the last few weeks it came up, the opportunity to sign one of the world's best goalkeepers -- then it's not a long thought, to be honest, it's only that you need to have a little talk with the owners! They were quite excited, so we did it," said Klopp.

"It shows the value of goalkeepers, of course, in this moment. It will happen a lot in the next few weeks I guess and that's it, so we are really happy to have him here now.

Klopp added: "His English is surprisingly good and he is a real personality. He has meanwhile a lot of experience in the last few years, in Europe and in Rome, he's played there on an outstandingly high level and he did the same at the World Cup."

Klopp was quick, however, to warn fans that Alisson will need time to adapt to life in the Premier League and can still improve further.

"The full package is just good," the coach added.

"Yes (the atmosphere) in part it did influence the decision," he said.

"When you make an important decision like this it's not just a decision to change clubs, it practically changes your entire life, my family's life, my wife, my daughter.

"That game definitely did have an influence but I also watched other games. I've seen other games where I could see the way Klopp had the team playing.

"That has made me really excited to be part of this group. Apart from the fact that the club is massive, the players that have come through here and the titles won, hopefully I can play a part in the history being created here, win titles and be a part of the project that has been developed here in the past few years so we can see Liverpool rise once again."

Roma Alisson Loris Karius Jurgen Klopp Mohamed Salah Football
Get the latest updates on Fifa Worldcup 2022 and check out  Fifa World Cup Schedule, Stats and Live Cricket Score. Like us on Facebook or follow us on Twitter for more sports updates. You can also download the NDTV Cricket app for Android or iOS.