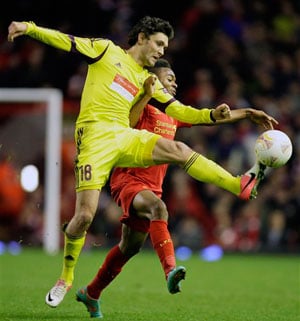 The Reds are 12th in the English Premier League, already trailing leaders Manchester United by 13 points after their worst-ever start to a season.

But ex-Chelsea man Zhirkov warns last month's 0-1 defeat to Brendan Rodgers' side at Anfield could repeat itself if the Russian Premier League leaders start to believe they have the upper hand.

"This club is from the elite of the English championship. Maybe they're in a temporary lull, like everyone has, but they're a serious side," said Zhirkov, who played all 90 minutes in Liverpool.

"The British always put everything into it. Whatever competition you're talking about, including the FA Cup and League Cup, they go out and fight for the full 90 minutes."

A win for Anzhi will see Guus Hiddink's men overtake Liverpool to head Group A; as it stands they are two points behind. Anything less than a win could see Udinese or Young Boys take second place.

The Reds arrive in Moscow later on Wednesday after a morning training session in Merseyside.

Comments
Topics mentioned in this article
Football Liverpool
Get the latest updates on IPL 2021, IPL Points Table , IPL Schedule 2021 , live score . Like us on Facebook or follow us on Twitter for more sports updates. You can also download the NDTV Cricket app for Android or iOS.