Lionel Messi and Cristiano Ronaldo are now set to renew their individual rivalry when Barcelona and Juventus clash in Group G. 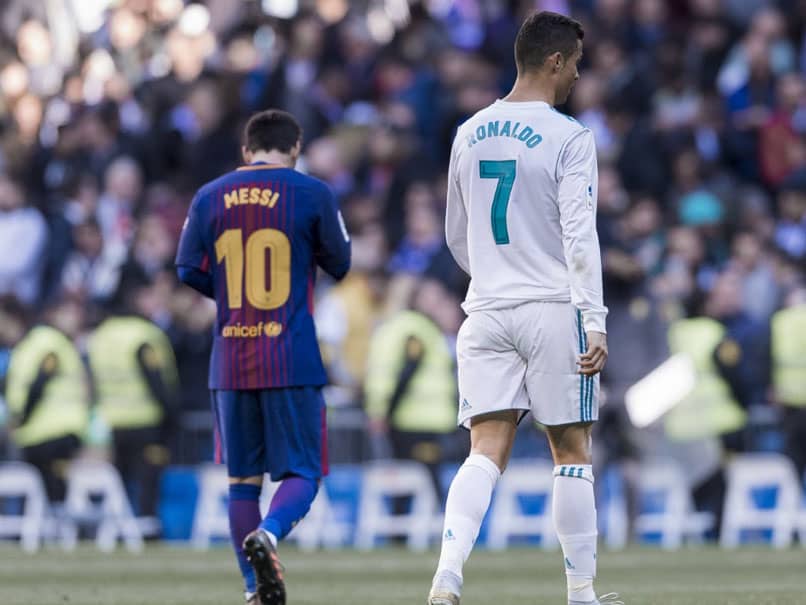 Lionel Messi and Cristiano Ronaldo haven't faced off since the Portuguese left Real Madrid in 2018.© AFP

European football is reeling with stadiums largely empty and revenues down, but it is business as usual on the field for the continent's biggest clubs this week as the Champions League group stage gets underway and Bayern Munich begin their defence of the trophy. Hansi Flick's all-conquering team have a glamour tie to get things going, at home to Diego Simeone's Atletico Madrid on Wednesday. Before that, on Tuesday, Paris Saint-Germain return to the competition following their defeat by Bayern in last season's final as they take on Manchester United.

AFP Sport picks out some of the storylines to watch over the next few weeks:

They are the two greatest players of their generation with 11 Ballons d'Or between them, and the two highest scorers in Champions League history. Lionel Messi and Cristiano Ronaldo are now set to renew their individual rivalry when Barcelona and Juventus clash in Group G.

Ronaldo is currently self-isolating after testing positive for Covid-19 and will need to pass a negative test before being allowed to feature against Barca in Turin on October 28. The return at the Camp Nou is on December 8.

Both sides should advance from a group also containing Dynamo Kiev and Ferencvaros, but both Messi and Ronaldo are running out of time to win the Champions League again. Messi, now 33, has featured in four victorious campaigns, while 35-year-old Ronaldo has won it five times.

Will Man Utd get out of their group?

Manchester United begin their campaign at Paris Saint-Germain in a repeat of their dramatic last-16 meeting in 2018-19, when the Red Devils progressed thanks to a controversial late penalty.

That was arguably the high point of Ole Gunnar Solskjaer's reign as Old Trafford manager. It was his 14th win in 17 games as caretaker, and soon after he got the job permanently. But United went out to Barcelona in the quarter-finals and did not qualify for last season's Champions League.

Solskjer's first full campaign in charge saw United finish third to return to Europe's top table, but serious doubts remain about his managerial ability and they are in a tough group, with last season's semi-finalists RB Leipzig and the Turkish champions, Istanbul Basaksehir, as well as PSG.

The knives will be out for the Norwegian if they fail to make the knockout stage.

Erling Braut Haaland was the star of last season's Champions League before the competition was interrupted by the coronavirus pandemic.

The Norwegian was a sensation for Red Bull Salzburg in the group stage, scoring eight times. After moving to Borussia Dortmund in the winter he scored two more in the defeat of PSG in the last 16, first leg, although Dortmund ended up losing on aggregate.

In total Haaland scored 44 club goals last season, all before turning 20 in July. He already has 11 this season for club and country and Dortmund will hope he can help them out of a group also containing Zenit Saint Petersburg, Lazio and Club Brugge.

Atalanta's run to the quarter-finals, where they suffered an agonising defeat to PSG, would have been heartwarming even had it not coincided with their home city of Bergamo being devastated during the first wave of the coronavirus pandemic.

Gian Piero Gasperini's side qualified for the last 16 despite losing their first three group games and then beat Valencia 8-4 on aggregate in their debut Champions League campaign. They also finished third in Serie A to return to Europe's elite club competition.

But Atalanta are no longer a surprise package and are probably now favourites to advance from their group along with Liverpool, and ahead of Ajax and the Danish champions, Midtjylland. Will they continue to thrive despite no longer being the dark horses?

Atalanta may no longer be the new boys but four teams are appearing in the group stage for the first time.

The most interesting first-timers are Rennes, who had a best-ever third-place finish in France a year on from winning the French Cup. In Julien Stephan they have one of Europe's best young coaches, while midfielder Eduardo Camavinga is possibly the hottest young prospect in world football. They are in a difficult group, though, with Chelsea, Sevilla and another newcomer in Russian side Krasnodar.

Midtjylland will have it tough up against Liverpool, Atalanta and Ajax. Meanwhile, after breaking up the dominance of the Istanbul giants in Turkey, Basaksehir will hope to cause problems for PSG, Manchester United and Leipzig.