Barcelona wrapped up a 25th La Liga title with four matches to spare, after a Lionel Messi hat-trick secured a thrilling 4-2 victory against Deportivo La Coruna. 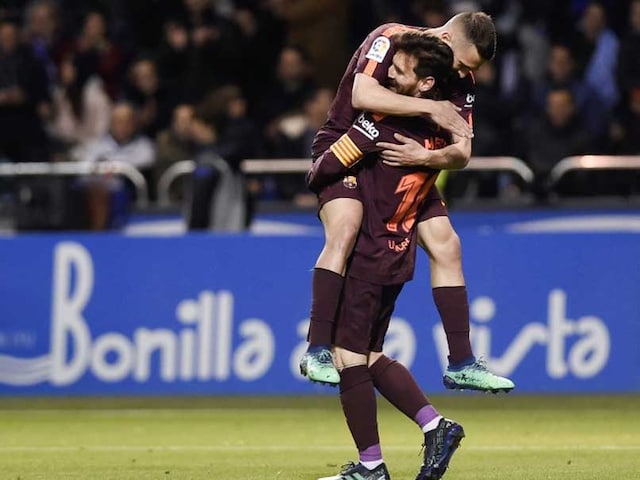 Barcelona coach Ernesto Valverde was delighted that his side "finally" wrapped up a 25th La Liga title with four matches to spare, after a Lionel Messi hat-trick secured a thrilling 4-2 victory for Barcelona at Deportivo La Coruna on Sunday. Valverde's men completed a league and cup double after thrashing Sevilla 5-0 in last week's Copa del Rey final, regaining the Spanish crown from Real Madrid and relegating Deportivo in the process. "When you chase it for so long you say 'finally'," he told Spanish television.

"I feel very happy because in the end the league is very long, it starts in August... and when spring arrives everything is decided, we have passed everything.

"We've been pursuing it since the beginning, we have been in the lead, we've finished well, with a big margin... It's the first La Liga that I've won."

The only blip on the Catalans' season was the stunning Champions League quarter-final loss at Roma when they blew a 4-1 first-leg lead.

"The elimination (by Roma) marked us a little bit because it was unexpected, but out trajectory has been extraordinary," added Valverde.

"There is always a small 'but', but we'll try again next year."

Barca knew they just had to extend their record unbeaten streak to 41 La Liga matches to seal a seventh title in 10 seasons, and Philippe Coutinho fired them into an early lead.

Messi's 38th-minute volley made it two, but Lucas Perez pulled one back for Deportivo before half-time and Turkish winger Emre Colak stunned Barca with an equaliser midway through the second period.

Barca finally saw off their stubborn hosts, though, as Messi pounced after a brilliant one-two with Luis Suarez before slotting in to complete his 30th La Liga treble.

The Catalan giants now hold an unassailable 11-point lead over second-placed Atletico Madrid, who have just three games to play, and are closing in on becoming the first Spanish side to go through a top-flight season without tasting defeat.

"We have managed an almost perfect league campaign, without losing so far. I hope we can continue," midfielder Sergio Busquets said.

Andres Iniesta was surprisingly left on the bench after the midfield great announced earlier this week that he will leave the club at the end of the season.

But it was his expected long-term successor Coutinho who broke the deadlock in the seventh minute, bending an exquisite finish into the top corner for his third La Liga goal for the club since signing from Liverpool in January.

Deportivo had to win to stave off relegation for another week, but Clarence Seedorf's men were denied an equaliser when Perez was flagged offside after tapping in from close range.

Messi went close to doubling the advantage just before the half-hour mark, only for home goalkeeper Ruben to pull off an excellent one-handed save to turn his free-kick around the post.

Deportivo were causing Barca plenty of problems at the back, though, and centre-back Fabian Schaer should have levelled as he headed over when unmarked inside the six-yard box.

But Messi drilled a curling Suarez cross past Ruben at the keeper's near post to score his 30th league goal of the campaign, before on-loan Arsenal striker Perez swept home to halve the deficit just two minutes later.

Despite the close scoreline, Barca were playing as if the second half was a pure title party, with centre-back Gerard Pique even performing a few 'keepie uppies' on the left wing.

Their complacency cost them in the 64th minute, as Celso Borges unselfishly squared for Colak to score.

Suddenly the champions-elect were desperately trying to hang onto their unbeaten record, as goalkeeper Marc-Andre ter Stegen made a smart stop from another Schaer header.

But Barcelona showed their class as Suarez and Messi combined to terrific effect with eight minutes to play -- the latter clipping the ball in off the post.

Suarez again sent the Argentinian racing clear three minutes later, and the 30-year-old made no mistake to complete a hat-trick.

The 33-year-old Iniesta came on to a standing ovation in the 87th minute as Barca closed out a successful title-winning campaign in style.

Comments
Topics mentioned in this article
Barcelona Real Madrid Deportivo La Coruna Lionel Messi Andrés Iniesta Football
Get the latest updates on IPL 2020, check out the IPL Schedule for 2020 and Indian Premier League (IPL) Cricket live score . Like us on Facebook or follow us on Twitter for more sports updates. You can also download the NDTV Cricket app for Android or iOS.