Lille moved back top of Ligue 1 on Sunday after holding Paris Saint-Germain to an uninspiring goalless draw which failed to live up to its pre-match billing. 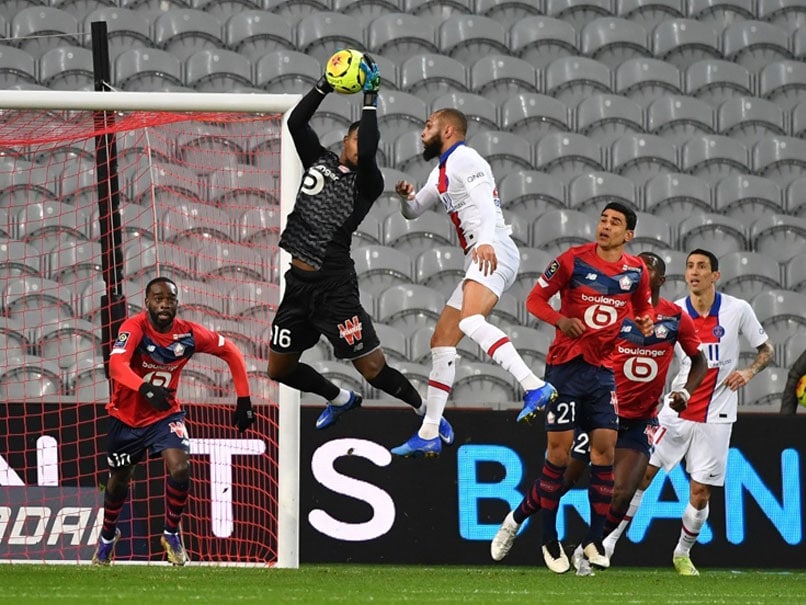 Lille moved back top of Ligue 1 on Sunday after holding Paris Saint-Germain to an uninspiring goalless draw which failed to live up to its pre-match billing. Lille take first place in the French top flight from Lyon on goal difference after a match which saw just a handful of shots on target and very little in the way of incident. PSG are a point back in third after failing to create anything from their territorial dominance, shorn of attacking inspiration without Neymarand Mauro Icardi, among others, while Kylian Mbappe started on the bench as he reportedly struggles with a thigh knock.

Marseille meanwhile are five points behind the leaders after their 1-1 draw with Reims on Saturday, although Andre Villas-Boas' side do have two games in hand on their title rivals.

"We lacked a lot of quality but we played well. We were very disciplined and we never lost our structure."

PSG were the stronger side in a dismal first half which didn't see a shot on target until Moise Kean's weak flicked header was easy collected by Mike Maignan in the 42nd minute.

Lille, who on Friday were sold to Callisto, a subsidiary of the Merlyn Partners investment fund, struggled to get a foothold in the biggest match of their league campaign so far.

PSG's dominance continued in the second period but they were lacking their usual creative spark, and the highlight of the latter stages was Presnel Kimpembe's superb tackle on Burak Yilmaz with Lille charging towards goal on the break.

Kimpembe appeared to injure a hamstring as he charged across to make the goal-saving tackle with 12 minutes remaining, and limped off soon afterwards.

Mbappe had been brought on a minute before Kimpembe's challenge but did very little in the time afforded him, and the curtain was soon brought down on a forgettable encounter between two tired-looking teams.

Their win moved the seventh-placed principality club within seven points of Lille and Lyon.

Former Bayer Leverkusen forward Volland slotted in the only goal on 15 minutes, with both sides seeing later efforts ruled out by VAR.

"After four straight wins and then three defeats on the bounce, the most important thing was to win," said coach Niko Kovac.

"It was not the best Monaco but we showed lots of character and that's the best way to move forward."

Rennes are two points ahead of Monaco in fifth after strolling to a 3-0 win at Lorient, who sit second-from-bottom after their 11th defeat of the season.

Damien Da Silva opened the scoring with a deflected close-range effort midway through the first half, and Benjamin Bourigeaud doubled the away side's lead with a fine first-time strike with 20 minutes remaining.

Martin Terrier completed the scoring six minutes later when he cut in from the left before curling home past Paul Nardi.

Rennes are level with Marseille on 28 points, five behind Lille.

Lorient's day took on a sombre tone after it was confirmed that a groundsman working for the club had died after being hit by a falling playing field heat lamp just minutes after the match.

One point ahead of Lorient in 18th place are Nimes, who came away from Saint-Etienne with a 2-2 draw.

Elsewhere, Montpellier missed the chance to move into fourth as they were held to a 2-2 draw at Brest.

Paris SG Neymar Kylian Mbappe Football
Get the latest updates on T20 World Cup, check out the T20 World Cup Schedule and Live Score . Like us on Facebook or follow us on Twitter for more sports updates. You can also download the NDTV Cricket app for Android or iOS.