Celtic chief executive Peter Lawwell said the attacks on Neil Lennon "shamed" Scotland as the Glasgow giants confirmed a bullet had been sent to the club just a day after their manager was assaulted. 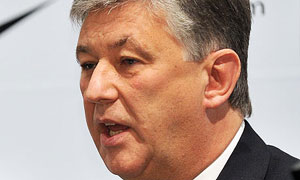 Celtic chief executive Peter Lawwell said the attacks on Neil Lennon "shamed" Scotland as the Glasgow giants confirmed a bullet had been sent to the club just a day after their manager was assaulted.

Police arrested a fan who emerged out of the Hearts section of the main stand at the Edinburgh club's Tynecastle ground on Wednesday and charged towards Lennon, who has been the repeated target of threats on account of his Catholic background.

He made no plea and was remanded in custody.

Wilson was handed a life ban by Edinburgh club Hearts later on Thursday.

In a separate incident, two men were being held by police in connection with an investigation into parcel bombs addressed to Lennon and to two other high-profile Celtic supporters in March.

Both bombs intended for Lennon were intercepted at postal sorting offices.

"I can also confirm that this (Thursday) morning another package arrived at Celtic Park which appears to contain ammunition."

Lawwell added: "It is intolerable that any football club, or individual, going about their lawful business in the name of sport should be subjected to this ongoing campaign of hatred and intimidation."

"This is Scotland's shame and it is high time Scotland addressed it."

But with Celtic, following a 3-0 win against Hearts in Edinburgh, still in with a chance of winning the Scottish Premier League title, Lennon wrote on his Twitter page: "Don't let what happened to me take the shine off a wonderful team performance... I don't walk alone."

"First and foremost, Neil is shaken about the whole thing, but he won't be driven out of Scotland," Reilly told Scottish Television. "He won't throw in the towel."

Hearts said they were disgusted by the incident on Wednesday.

"While not wanting to prejudge the outcome of the court case, all true Hearts fans will have been disgusted by what they witnessed last (Wednesday) night," said a Hearts spokesman.

"There is no justification for such actions, which have no place in the game of football, and we have taken the severest action open to set the strongest possible deterrent."

"As such, the supporter involved has been handed a life ban from Tynecastle."

Undercurrents of sectarian tension have long been a common feature of Scottish football, with several cities featuring clubs historically divided on religious lines.

For example, Celtic draw the bulk of their support from Glasgow's Catholic community while local rivals Rangers are a predominantly Protestant club.

Lennon, who received death threats while playing for Northern Ireland, where the majority of the population are Protestants, was also beaten up in a Glasgow street while on a night out in September 2008.

"Since moving here a decade ago, Neil Lennon has had to endure prejudice and violence both as a player and manager, having suffered no such problems elsewhere," Lawwell said.

"He is a man who is proud to be the Celtic manager and is someone who simply wants to be able to carry out his role in the same way as every other football manager can."

"Clearly, Neil will continue to receive every support and protection from Celtic Football Club."

"We are deeply appreciative of the intensive police efforts to address the criminal offences that have come to light."

Celtic are just a point behind leaders Rangers ahead of this weekend's final round of SPL matches.

Comments
Topics mentioned in this article
Football Celtic Scotland
Get the latest Cricket news, check out the India cricket schedule, Cricket live score . Like us on Facebook or follow us on Twitter for more sports updates. You can also download the NDTV Cricket app for Android or iOS.