Lee Chung-Yong fired Bolton into the FA Cup last four as the South Korean's late goal clinched a 3-2 win over Birmingham in the quarterfinals at St Andrew's on Saturday. 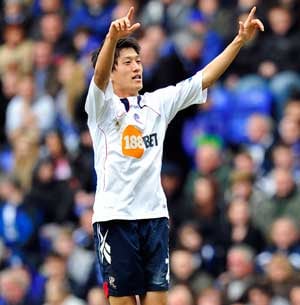 Lee Chung-Yong fired Bolton into the FA Cup last four as the South Korean's late goal clinched a 3-2 win over Birmingham in the quarterfinals at St Andrew's on Saturday.

Owen Coyle's side looked to have been denied a place in the last four when Kevin Phillips hit a late equaliser for Birmingham, but Bolton midfielder Lee headed the winner in the 90th minute to send the visitors to the Wembley semis.

Bolton had taken the lead through Johan Elmander's cool finish in the 21st minute before Cameron Jerome lashed in Birmingham's first equaliser in the 38th minute.

Kevin Davies converted a 66th-minute penalty, awarded after Curtis Davies fouled the Bolton striker, only for Phillips to scoop in a superb equaliser with 10 minutes to play.

But Birmingham's dreams of adding the FA Cup to the League Cup they won against Arsenal last month came to an end when substitute Lee ran onto Davies's header and nodded past Ben Foster.

Coyle saluted Lee's influential display but admitted he will continue to rotate the winger in and out of the side to keep him fresh.

"I think Lee is capable of playing for any team. But he hasn't had a break for two years though and we have to be careful with him," Coyle said."

Bolton have not won the FA Cup since the legendary Nat Lofthouse, who died earlier this year, inspired them to victory over Manchester United in the 1958 final.

Asked if his team wanted to win the trophy to honour Lofthouse's memory, Coyle added: "It would be lovely to go and do that but there a few obstacles in our way, but we will do everything in our power to win this competition.

"It was two teams that were very positive and trying to win the game at the first time of asking.

"I thought we had to take care of the ball a bit better and we did that when Mark (Davies) and Lee came on. Sometimes the substitutes benefit from all the hard work that went before them."

Comments
Topics mentioned in this article
Football Badminton Birmingham City Bolton Wanderers Manchester City Manchester United Arsenal
Get the latest updates on ICC T20 Worldcup 2022 and CWG 2022 check out the Schedule, Live Score and Medals Tally. Like us on Facebook or follow us on Twitter for more sports updates. You can also download the NDTV Cricket app for Android or iOS.