An injury-time goal from Belgian starlet Eden Hazard gave Lille a 2-1 win at home to northern neighbours Valenciennes on Sunday that sent them three points clear at the top of the table. 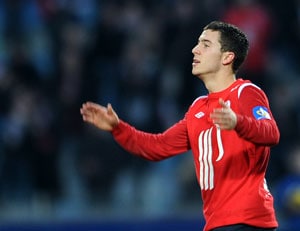 An injury-time goal from Belgian starlet Eden Hazard gave Lille a 2-1 win at home to northern neighbours Valenciennes on Sunday that sent them three points clear at the top of the table.

The 20-year-old winger received a pass from Rio Mavuba and cracked a low shot into the bottom-left corner in the 91st minute, after Moussa Sow's first-half opener for the hosts had been cancelled out by Gregory Pujol.

"So much the better for me and the team. They're two very important goals. We'll go to Brest (next weekend) with a three-point lead."

The result takes Lille three points above second-place Rennes and four points clear of Lyon and Marseille, while Paris Saint-Germain are eight points off the pace prior to the visit of Montpellier later on Sunday.

Playing for the first time on their freshly laid pitch at Stadium Lille-Metropole, Lille saw Sow squander a straightforward chance to put his side ahead in the 22nd minute.

The league's top scorer was picked out in space, eight yards from goal, by Hazard but swept a lazy shot several metres over the crossbar.

Sow atoned six minutes before half-time, however, with a left-foot shot from the edge of the area that took a deflection off Milan Bisevac and span into the top-right corner of Nicolas Penneteau's goal.

It was his 18th league goal of the season.

Valenciennes had shown little as an attacking force but they drew level in the 59th minute when Pujol ran onto a Renaud Cohade pass and drove the ball into the bottom-right corner.

Pierre-Alain Frau was given a clear sight of goal by a Hazard pass moments later but he lifted his left-foot shot over the top.

A disappointing draw beckoned, but Hazard showed impressive sang-froid to earn his team victory, finding a pocket of space inside the crowded Valenciennes box and drilling in a low shot off the left-hand post.

In Sunday's other early game, a 22nd-minute header from defender Adriano gave Monaco a 1-0 win at Bordeaux that took the principality club out of the relegation zone on goal difference, dragging Auxerre into the bottom three.

Monaco have now lost just once in their last five outings, while Bordeaux remain 11 points outside the Champions League places in eighth position.

"We're still in a complex situation and we definitely can't get carried away," said Monaco coach Laurent Banide, who replaced Guy Lacombe in January.

"We've done something good, now we have to build on it. It pushes us to work even more to get out of the danger zone."

On Saturday, Lyon prepared for Wednesday's Champions League assignment at Real Madrid in ideal fashion with a 2-0 win at Sochaux.

Lyon are now third, level on points with Marseille, who put a difficult week behind them to win 2-0 at Rennes on Friday night, ahead of their trip to Manchester United in the Champions League on Tuesday.

The champions had lost 2-1 at home to Lille last weekend and saw Brazilian striker Brandao arrested on suspicion of rape, but goals from Loic Remy and Lucho Gonzalez allowed them to end Rennes' five-match winning run.