Bayern Munich have decided to stick to coach Louis van Gaal despite the club's worst run of form in more than 10 years, but only because they have no credible replacement, German media reports said on Monday. 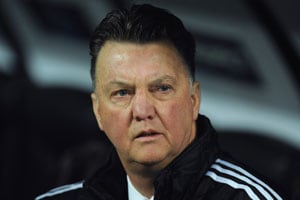 Bayern Munich have decided to stick to coach Louis van Gaal despite the club's worst run of form in more than 10 years, but only because they have no credible replacement, German media reports said on Monday.

A fully deserved 3-1 defeat to Hanover on Saturday was the German giants' third consecutive defeat, leaving them fifth, and seven points adrift of the second place spot that would guarantee them Champions League football next season.

Bayern Chairman Karl-Heinz Rummenigge met for five hours of crisis talks on Sunday with number two Karl Hopfner, president Uli Hoeness and director of sport Christian Nerlinger to discuss what to do, the Bild daily said.

But the result was: not a lot.

With a dearth of available candidates ready and able to bring Bayern back to winning ways, the result of the meeting was to keep van Gaal, 59, at the helm - at least for the next few games.

The Bild daily said that even if the defending Bundesliga champions and Champions League finalists win these games, it looks as though van Gaal will agree to leave at the end of the season, one year before his contract ends.

If they don't, and Bayern fail to qualify for the Champions League - the final of which will be at Bayern's Munich ground in 2012, with or without them - then the Dutchman could be shown the door even sooner, Bild said.

Van Gaal was due to meet with Bayern's bosses later on Monday.

"I have always had the support of my board. They decide whether to withdraw this support, not me," van Gaal said after Saturday's defeat, which put them 19 points adrift of leaders Dortmund and five points behind third-placed Hanover.

Rummenigge said the result and the manner of the defeat to Hanover was "the low point of the season" but said he would not take a knee-jerk reaction.

"Of course we are all disappointed, but I think we have all been around long enough to know that after such a game, you need to have a night's sleep before you consider what to do."