Landon Donovan and Robbie Keane, who will try to help the Los Angeles Galaxy to a second straight MLS Cup title on Saturday, were among Major League Soccer's 2012 Best XI named on Monday. 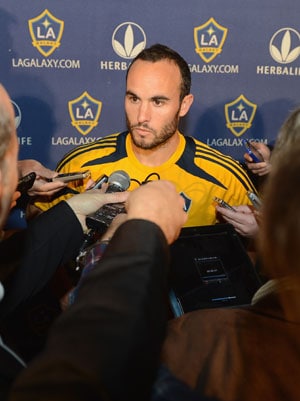 Landon Donovan and Robbie Keane, who will try to help the Los Angeles Galaxy to a second straight MLS Cup title on Saturday, were among Major League Soccer's 2012 Best XI named on Monday.

MLS commissioner Don Garber announced the 11 honorees in his state of the league conference call, in which he touched on such topics as David Beckham's imminent departure from MLS -- saying the league would be just fine without him despite his undeniable drawing power.

Garber noted that since the former England captain joined the Galaxy to great fanfare in 2007 the league has added seven teams and 10 purpose-built grounds.

"We needed David Beckham in 2007 to help drive our credibility, to help grow our popularity and to show the world, really, that the United States at that time -- the US and Canada -- was ready to support a division one league at the levels that it could be supported around the world," Garber said.

"We don't need anything today to get us to the next level," added Garber, who said attendance was up 25 percent since 2005 and 2012 was the league's most successful season to date.

Sporting Kansas City landed a league-leading four players on the Best XI, including Most Valuable Player nominee and rising US national team star Graham Zusi and Defender of the Year Matt Besler.

Defender Aurelien Collin and goalkeeper Jimmy Nielsen also made the list, which is voted on by MLS players, club leadership and media members.

Sporting Kansas City finished with the best regular-season record in the Eastern Conference for the second successive season and won the US Open cup for the second time in club history.

The Earthquakes won the Supporters' Shield as the club with the best regular-season record, but like Sporting they were eliminated in the MLS Cup playoffs.

The Galaxy beat the Earthquakes in the Western Conference finals and will host the Houston Dynamo in the league's title match on Saturday.

The Galaxy's victory over Houston in last year's MLS Cup gave Beckham a first MLS title in the final year of his original five-year MLS contract.

He then signed on to return, but said this month that 2012 would be his last season playing in MLS and he would seek a new playing challenge -- still tantalizingly unspecified.

Garber was unconcerned that the playoffs have produced a rematch of last year's MLS Cup, even though the finalists are among the lower-seeded playoff teams.

"I think that's why people tune into games, why people write stories about teams that overcome adversity or get players back from injury or have great coaching or get really focused on the games that matter," Garber said.

"I'm not concerned about that. I think it's important to remember that most of our clubs and the reality of our regular season is how close they are competitively.

"That's something we strive for. I think any given Saturday or Wednesday any team can win."

Galaxy's Donovan was named to the Best XI for the fifth consecutive season and sixth time in his career, tying DC United midfielder Dwayne De Rosario for the most selections all-time.

Ireland's Keane makes the list in his first full season in the league after scoring 16 goals.

French forward Thierry Henry made the Best XI for the second successive season after posting an MLS career high of 15 goals for the New York Red Bulls. Henry is also up for the MVP award.

Comments
Topics mentioned in this article Football Landon Donovan Robbie Keane
Get the latest Indian Premier League 2020 news, check out the IPL 2020 schedule, Cricket live score . Like us on Facebook or follow us on Twitter for more IPL 2020 updates. You can also download the NDTV Cricket app for Android or iOS.
Related Articles