Landon Donovan, the all-time leading scorer for both the United States and in Major League Soccer, announced he would retire at the end of the season in August -- after he was left off Jurgen Klinsmann's World Cup squad. 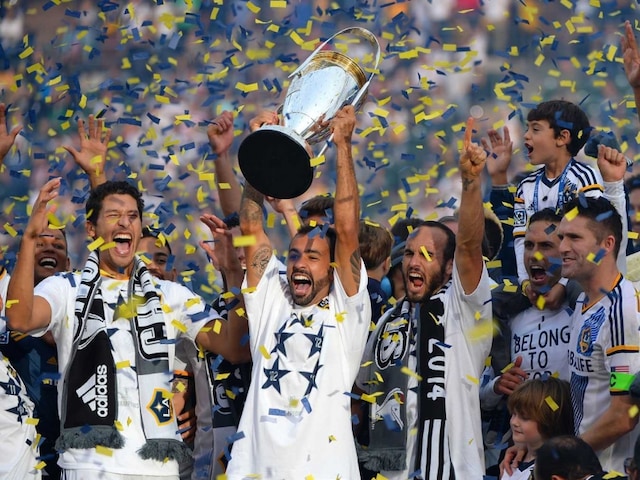 Donovan, the all-time leading scorer for both the United States and in Major League Soccer, announced he would retire at the end of the season in August -- after he was left off Jurgen Klinsmann's World Cup squad.

Keane, the newly named Most Valuable Player of the MLS regular season, endured a difficult afternoon at the StubHub Center in the Los Angeles suburb of Carson, but came through when it mattered the most. He slipped in behind the defence -- thanks to superb ball from Marcelo Sarvas -- to slide a shot into the bottom right corner.

"It was a tough game," Keane said. "I think there was a lot of nerves there, I think by both teams.

"I think we didn't play as well as we know we can at home, but it doesn't really matter. At the end of the day, we won, and we're the champions again."

The Galaxy had seized the lead in the 52nd minute as Gyasi Zardes got on the end of a cross from Stefan Ishizaki and fired a left-footed shot past New England keeper Bobby Shuttleworth.

The Revolution equalized in the 79th as rookie substitute Patrick Mullins got free on the left flank and got the ball to Chris Tierney, who took one touch and slotted a shot past Galaxy goalkeeper Jaime Penedo.

"A lot of credit to New England," Donovan said. "In a lot of ways they played better than we did today. They were terrific.

"There's games that you play during the year where you're not at your best," he added. "We weren't at our best today we know that. But in those moments you have to find a way to stay in it.

"We stayed in it, we waited for the play that we needed and we made the play."

In becoming the first club to win five MLS Cup titles, the Galaxy made the Revolution the first team to lose five MLS Cup championship matches. Three of those defeats came at the hands of the Galaxy.

He ends his playing career with 57 international goals and 144 in MLS play.

The 32-year-old promised that he wouldn't disappear from the American football scene.

"There's lots of excitement around this league, so I'm glad to have been a part of it," he said. "It's just the end of the playing part -- I'll still be around."

Comments
Topics mentioned in this article
Landon Donovan Football
Get the latest updates on IPL 2020, check out the IPL Schedule for 2020 and Indian Premier League (IPL) Cricket live score . Like us on Facebook or follow us on Twitter for more sports updates. You can also download the NDTV Cricket app for Android or iOS.