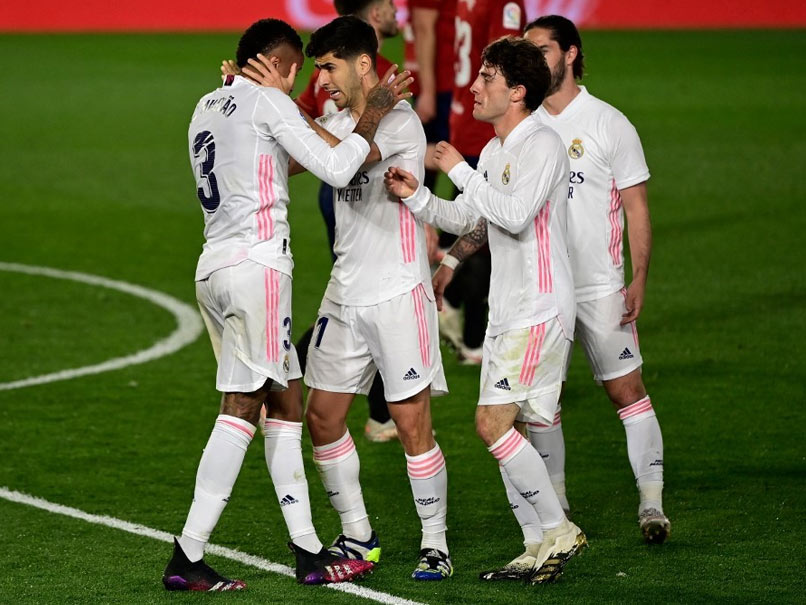 Real Madridheld their nerve to beat Osasuna 2-0 in La Liga on Saturday as Eden Hazard made his first start since January, raising the possibility of Zinedine Zidane picking him for Wednesday's Champions League semi-final second leg against Chelsea. After making a brief cameo off the bench in the first leg last week, Hazard played 72 minutes at Valdebebas and could now face his former club from the start in the pivotal return game at Stamford Bridge. "He was very good," said Zidane. "He played close to Karim (Benzema), they tried things and I was very happy with him."

Real Madrid have it all to do against Chelsea after drawing the opener 1-1 and they are playing catch-up in La Liga too, after Atletico Madrid had earlier scraped to a 1-0 victory against struggling Elche.

Elche's Fidel Chaves missed a 91st-minute penalty in what could prove a pivotal moment in Spain's thrilling title race, with Atletico maintaining their two-point lead over Real Madrid and stretching the advantage to five over Barcelona.

Barca travel to Valencia on Sunday while Sevilla, who are now six points back, play their game in hand on Monday against Athletic Bilbao.

Atletico's win meant victory for Real Madrid was essential and they had to work hard for it against a determined Osasuna side, Eder Militao breaking the deadlock in the 76th minute before Casemiro made it two four minutes later.

Zidane's squad has been stretched by absentees in recent weeks and he left Luka Modric and Toni Kroos on the bench, while handing Hazard his first start since January 30.

There could be a fresh concern, though, after defender Raphael Varane was taken off at half-time.

"I hope it's a little thing but right now I can't say," Zidane said.

The best chance fell to Hazard from a Marcelo cross but he failed to catch the volley cleanly, instead scuffing it into the ground and goalkeeper Sergio Herrera did brilliantly to save.

Benzema had already gone close and Militao had a pair of headers early in the second half that again drew Herrera into action.

Hazard faded and departed with 18 minutes left. Osasuna were tiring too and finally Madrid got the breakthrough, Militao making it third time lucky, rising high to head in Isco's corner.

Four minutes later it was two, Benzema driving in from the left and slipping a reverse pass through for Casemiro, who stretched to control and instead poked tha ball directly into the net.

First, Antonio Barragan volleyed over from close range and then Marcos Llorente's handball gave Fidel a chance from the spot but he struck the post.

"I don't believe in luck," Llorente said. "If it didn't hit the post, I think Oblak would have got to the shot. We have the points and that gives us a lot of strength going forward."

Atletico are now guaranteed to be ahead of Barca when they kick off at Camp Nou next Saturday.

Real Madrid also face Sevilla at Valdebebas a day later in a crunch weekend at the top but the resistance of 18th-placed Elche against La Liga's frontrunners suggests the race may well go to the final day.

Simeone's side were denied three times in the first half, Luis Suarez missing a golden chance before they had a goal and a penalty ruled out by VAR.

Finally, Atletico broke through, with Yannick Carrasco weaving through down the left before picking out the arriving Llorente, whose shot deflected off Josema Sanchez on its way in.

Barragan should have equalised with five minutes left when the ball was headed back to him six yards out but somehow he volleyed over.

There was more drama to come as Victor Rodriguez's cross struck the hand of the leaping Llorente in the box and Fidel stepped up to secure a point. Instead, he found the outside of the post.

Elche Casemiro Football
Get the latest updates on IPL Auction 2023 and check out  IPL 2023 and Live Cricket Score. Like us on Facebook or follow us on Twitter for more sports updates. You can also download the NDTV Cricket app for Android or iOS.