La Liga: Gareth Bale Back With a Bang as Real Madrid Extend Lead

Gareth Bale, who came on as a substitute on Saturday after three months on the sidelines, scored seven minutes from time as Real Madrid defeated Espanyol 2-0 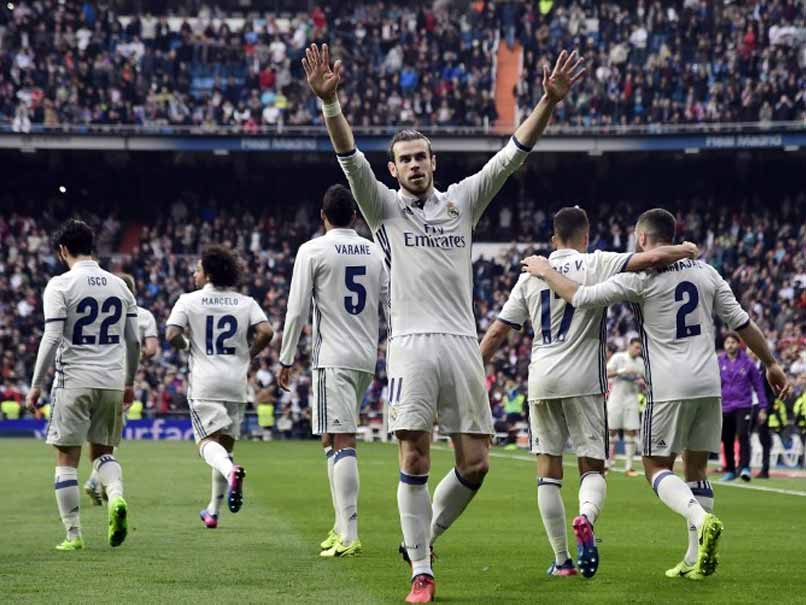 Gareth Bale made an instant impact on his return from injury as Real Madrid extended their lead at the top of La Liga to three points with a 2-0 win over Espanyol on Saturday. Bale had only been on the pitch 13 minutes after three months on the sidelines due to ankle ligament damage when he swept home into the far corner seven minutes from time to round off a rapid Real counter-attack. Alvaro Morata had opened the scoring when he bulleted home Isco's cross 12 minutes before half-time. Elsewhere, Sevilla moved above Barcelona -- who are in action on Sunday at home to Leganes -- into second thanks to a 2-0 win over Eibar.

"I was happy just to be on the pitch. To get a goal is an extra bonus and thankful to help the team and see the game off," said Bale.

"It's been a difficult time but when you get a reception like that it makes it all worth it."

Madrid boss Zinedine Zidane made seven changes to the side that started Wednesday's 3-1 Champions League last 16, first-leg win against Napoli with difficult La Liga trips to Valencia and Villarreal to come in the next week in mind.

Morata was one of those handed a rare chance to start up front with Karim Benzema left out of the squad altogether.

The Spanish international hadn't started any of Real's previous five league games, but made his case for more minutes as he powered home Isco's fine in-swinging cross for his 11th goal of the season.

Bale's much-anticipated return since injuring ankle ligaments away at Sporting Lisbon on November 22 came 20 minutes from time when he replaced Morata.

And the Welshman showed the home fans what they have been missing as again Isco was the provider for Bale to finish off a lightning quick Real counter-attack by firing into the far corner.

"We only have one Gareth Bale," said Zidane.

"We are happy to see Gareth back with the team. He is a special player, he gives us something different from the rest."

Sevilla remain three points behind Madrid as they warmed up for their Champions League clash with struggling English champions Leicester City on Wednesday with victory.

Pablo Sarabia netted the opener when he side-footed home Stefan Jovetic's pinpoint cross after half an hour.

Adrian Gonzalez fired inches wide for the visitors after the break as a first defeat in four leaves Eibar still in seventh.

Spanish international Vitolo sealed the points in stoppage time as he fired in from close range thanks to another Jovetic assist.

Atletico Madrid tightened their grip on fourth thanks to a five-minute hat-trick from substitute Kevin Gameiro in a 4-1 win at Sporting Gijon.

Gameiro was seconds away from making history as he just missed out on beating David Villa's record for the fastest hat-trick in La Liga history.

The Frenchman was only introduced 28 minutes from time but struck in the 80th, 81st and 85th minutes and dedicated the hat-trick to his recently deceased grandmother.

"Those goals are for my grandmother, who died this week. I scored three for her," he said.

Sergio Alvarez had cancelled out Yannick Carrasco's opener early in the second half before Gameiro's late show.

Comments
Topics mentioned in this article
Football Real Madrid Atletico Madrid Espanyol Barcelona Sevilla Gareth Bale
Get the latest updates on ICC Women's Cricket World Cup 2022 and IPL 2022, check out the Schedule , Live Score and IPL Points Table. Like us on Facebook or follow us on Twitter for more sports updates. You can also download the NDTV Cricket app for Android or iOS.