Mali international midfielder Seydou Keita scored only his second goal of the season as champions Barcelona moved ten points clear of Real Madrid in the Spanish first division with a hard-fought 1-0 home win over Real Zaragoza on Saturday. 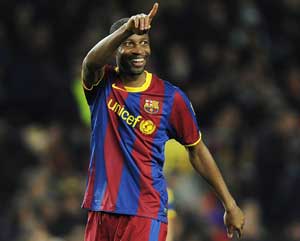 Mali international midfielder Seydou Keita scored only his second goal of the season as champions Barcelona moved ten points clear of Real Madrid in the Spanish first division with a hard-fought 1-0 home win over Real Zaragoza on Saturday.

The 31-year-old Keita, a fringe player this season, scored the decisive goal on 43 minutes as Barcelona made it three league wins in the space of eight days and piled the pressure on Real who travel to Racing Santander on Sunday.

It was a far from vintage performance, but three points and another clean sheet are the perfect preparation for Barcelona's Champions League second leg showdown with Arsenal on Tuesday as Barca bid to overturn a 2-1 deficit.

"It was a difficult game and we had to be careful of the counter attack as Zaragoza have some quick players," said Barcelona defender Gaby Milito. "We couldn't find as much space as we have done in the past, but we have won and now we can think about the Champions League."

Real Madrid are in action on Sunday when they travel to Racing Santander, looking to improve their erratic away form, but they must do so without top-scorer Cristiano Ronaldo who is missing with a thigh muscle strain.

Goalkeeper Victor Valdes also returned between the sticks after missing the last three league matches with a knee injury so Jose Manuel Pinto dropped to the bench.

Barca were almost given a shock in the eighth minute with Gerard Pique called upon to make a decisive late tackle as Nicolas Bertolo was about to shoot on goal.

The hosts had their first real effort in the 18th minute with Pedro Rodriguez's low shot tipped wide of the post after the home side had worked a training ground corner routine.

Minutes later Bojan's deflected shot clipped the bar and Keita had a header ruled out for a marginal offside.

Keita scored again on 43 minutes and this time the goal stood. Lionel Messi showed his trademark close control to get behind two Zaragoza defenders and cut the ball back from the right touch-line and the ball fell kindly for Keita to stroke home only his second league goal of the season.

Zaragoza, two points above the relegation zone, almost levelled early in the second half with Bertolo going past Pique but his curling effort crept inches past the post.

Pique had a header saved on the goal line before Florent Sinama Pongolle missed a glorious chance to equalise with an outstretched foot from Valdes denying the Frenchman.

Substitute Villa should have scored a second for Barca on 73 minutes but the striker blazed over after Maxwell's shot had been parried by Antonio Doblas but it didn't matter as the hosts saw out the game.

Hernandez, 25, scored in each half as Valencia bounced back from their midweek 1-0 home defeat to Barcelona with their eighth away win of the season to strengthen their position in third.

Atletico climb above Athletic Bilbao into sixth although Bilbao can reclaim the position with a draw or better at home to Sevilla on Sunday.

Comments
Topics mentioned in this article
Football Barcelona Seydou Keita Real Madrid
Get the latest updates on ICC T20 Worldcup 2022 and CWG 2022 check out the Schedule, Live Score and Medals Tally. Like us on Facebook or follow us on Twitter for more sports updates. You can also download the NDTV Cricket app for Android or iOS.