After nearly four years with the reigning Russian champions, Honda has been eyeing Europe's top clubs as he looks ahead to next year's World Cup in Brazil. 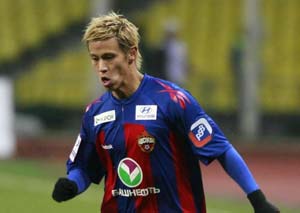 Documents related to his free transfer to the European giants have been submitted to Italian football authorities, the Sports Nippon daily said.

When CSKA Moscow issue a transfer certificate for Honda, he will automatically be registered as an AC Milan player, the sources told Sports Nippon.

AC Milan failed to sign the 27-year-old attacker -- who helped Japan reach the last-16 at the 2010 World Cup -- during the summer transfer window. The Russian side had reportedly demanded a five-million-euro ($6.7 million) transfer fee.

After nearly four years with the reigning Russian champions, Honda has been eyeing Europe's top clubs as he looks ahead to next year's World Cup in Brazil. He has in the past been linked with several English Premier League clubs.

After the summer deal broke down, Honda told media he had a "number of options" when his time in Moscow ends.

It was reported last week that Tottenham were set to sign Honda in January.

Juventus, Monaco and Liverpool are among other clubs that reportedly showed interest in acquiring Honda.

Comments
Topics mentioned in this article
Keisuke Honda AC Milan Football
Get the latest updates on ICC T20 Worldcup 2022, check out the Schedule and Live Score. Like us on Facebook or follow us on Twitter for more sports updates. You can also download the NDTV Cricket app for Android or iOS.