Moroccan Karim Bencherifa, beginning his second stint as coach of Mohun Bagan, on Monday said that his main aim would be to regain the I-League title. 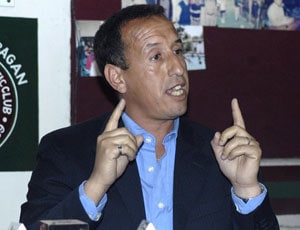 Moroccan Karim Bencherifa, beginning his second stint as coach of Mohun Bagan, on Monday said that his main aim would be to regain the I-League title.

The 44-year-old was recalled from Goa after Santosh Kashyap was asked to quit after the team's failure in the Federation Cup and the back-to-back defeats in the I-League.

Karim had served Mohun Bagan for 19 months before joining Salgaocar Sports Club in 2010 and won the I-League and Federation Cup in 2011.

Karim had left Bagan 33 months ago after differences cropped up between him and club officials.

Karim, who was with Salgaoncar before this assignment, said, "I am very happy to be back with Mohun Bagan. It's a new challenge and I am very comfortable in taking up challenges."

Karim, in his first stint, had shepherded Bagan to become runners up in the I-League and champions in the Federation Cup. It also topped the Calcutta Premier League.

But Mohun Bagan failed to win any tournament after Karim left the club.

Karim said under his coaching Salgaocar not only saved relegation, but emerged as champions in the I league. "I know the responsibility on my shoulder. Hopefully this will be a great season for Mohun Bagan again. We are now four points behind the league leader. It's not a big gap. Moreover, I league title is decided mostly on the performance in the second stage of the league," Karim said.

He said that there were many things that needed improvements, including the fitness level of the players, and that conditions here were better than at Salgaocar.

"I had to motivate the Salgaocar players a lot. The squad here has a lot of quality."

Asked about the reason for leaving Salgaocar, Karim said after they lost their 6th I-league match against Sikkim United on October 7, he decided to quit as his partnership with the club was not doing well.

Asked about the availability of Australian striker Tolgey Ozbey, Karim said he was injured and is in the process of rehabilitation.