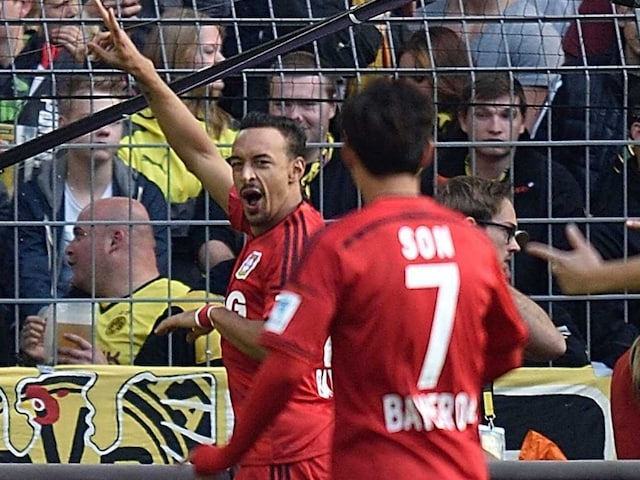 Bayer Leverkusen's Karim Bellarabi hit the Bundesliga's fastest ever goal to help condemn title hopefuls Borussia Dortmund to a 2-0 defeat in their opening game on Saturday.

The Leverkusen attacker struck after just nine seconds and then set up Stefan Kiessling in injury time as the visitors won in Dortmund for the second season in a row.

Bellarabi's strike was two seconds quicker than the previous record held by Bayern Munich's Giovane Elber and Leverkusen's Ulf Kirsten, both of whom scored in the 11th second of a Bundesliga game.

"My team did a lot right," Leverkusen manager Roger Schmidt said. "We attacked our opponents early. We played a great game and at the end of the day we deserved to win."

The visitors needed just three passes after the kick-off to find the net. Sebastian Boenisch picked out Bellarabi on the edge of the penalty area and he turned inside Matthias Ginter before firing beyond Mitchell Langerak.

Dortmund were shellshocked and Leverkusen gave them little time to find their rhythm.

Last season's runners-up improved after the interval but Leno brilliantly saved a header from Ginter with six minutes remaining and denied Ciro Immobile a debut goal in the final minute of normal time.

Kiessling then sealed the win five minutes into stoppage time after Bellarabi won the ball from from Dortmund left-back Erik Durm.

"For the first minute, I can't give any explanation," Dortmund manager Jurgen Klopp said.

"On account of that first minute, the game became a bit strange."

Schalke were dumped out of the German Cup by third division Dynamo Dresden on Monday but Klaas Jan-Huntelaar's goal looked set to give them victory on Saturday at Hanover.

Last season the Dutch striker's 12 goals helped Schalke finish third and he opened his account for the new campaign 90 seconds into the second half.

But the home side levelled 20 minutes later, when Leonardo Bittencourt picked out Edgar Prib.

"I'm extremely angry," said Schalke 04 boss Jens Keller. "It's incredibly annoying when you're in control of a game and you lose it through two counter-attacks."

Thomas Schaaf enjoyed his return to the Bundesliga as his Eintracht Frankfurt side beat visiting Freiburg 1-0.

Schaaf spent last season out of football after spending 14 years at Werder Bremen and a 15th-minute goal from Swiss striker Haris Seferovic gave him plenty to smile about.

"We can play a lot better," Schaaf said. "But I won't complain. This team work, have fun and want to prove themselves."

Julian Schieber scored twice on his Hertha Berlin debut but the home side were held to a 2-2 draw against Werder Bremen.

The former Borussia Dortmund forward headed Hertha into the lead after 16 minutes and then deservedly doubled their advantage early in the second half.

Hoffenheim also scored two goals in three minutes as they beat Augsburg 2-0. Hungarian striker Adam Szalai put them in front on 33 minutes after a goalmouth scramble.

Tarik Elyounousssi then had another simple finish as Augsburg, who lost to fourth tier Magdeburg in the German Cup, slumped to another defeat.

Meanwhile chances were few and far between as newly-promoted Cologne were held to a scoreless draw at home by big-spending Hamburg.

Comments
Topics mentioned in this article
Bayer Leverkusen Borussia Dortmund Karim Bellarabi Football
Get the latest Cricket news, check out the India cricket schedule, Cricket live score . Like us on Facebook or follow us on Twitter for more sports updates. You can also download the NDTV Cricket app for Android or iOS.