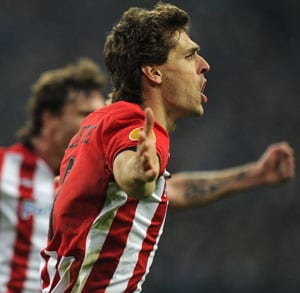 Italian champions Juventus have confirmed the signing of Spanish international striker Fernando Llorente, who will join the club after his contract with Athletic Bilbao ends this summer.

Llorente, 27, will join Juventus on July 1 on a four-year deal, the Italian giants announced on Thursday.

A statement from the club said: "Juventus can confirm that Spanish international striker Fernando Llorente will join the club on 1 July 2013.

"The 27-year-old has agreed terms on a four-year deal and will move to Turin when his Athletic Bilbao contract expires at the end of the current season."

However the Bianconeri have been on the lookout for a towering striker with a proven goalscoring record as they continue their quest to challenge for top European honours.

Former Chelsea star Didier Drogba, who played a key role in the Blues' Champions League triumph last year, had also been linked with a move to Turin recently.

However Llorente had also been on Juve's radar since the start of the season, primarily because he has been able to join on a free transfer after failing to negotiate an extension with Athletic.

Having scored seven times for Spain in 21 appearances for Spain, Llorente's goals helped Athletic to the final of the Europa League last season although the Basques were outclassed 3-0 by fellow Spanish league side Atletico Madrid.

Juventus won their 28th scudetto last season -- their first since 2006 and one of two titles they were stripped of due to a match-fixing affair -- and are favourites to defend their title this season.

Antonio Conte's side currently hold a five-point lead on Napoli and Lazio and travel to Celtic for the first leg of their Champions League last 16 tie against the Scottish champions next month.

Officially an Arsenal player, Bendtner arrived at Juventus on a six-month loan deal from Sunderland in September but has made only a handful of appearances for Juve.

The Danish international striker is currently sidelined with a thigh injury suffered in an Italian Cup game in December.