Danish international striker Nicklas Bendtner suffered a strain to a left thigh tendon that could keep him out for a few months while Chilean midfielder Arturo Vidal suffered bruising on his knee but should soon be on the mend. However Juve coach Antonio Conte, back on the touchline after serving a four-month ban, said the setbacks will not affect their ambitions this season. 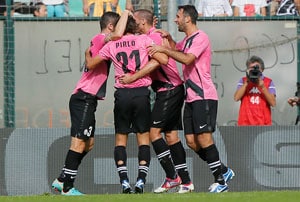 Juventus host Atalanta in a bid to reinforce their lead in Serie A on Sunday, although one eye will have been firmly fixed on Inter Milan's visit to Lazio a day earlier.

Juventus have opened up a four-point lead on Inter, who leap-frogged Napoli last week, and welcome their visitors from Bergamo a few days after sealing a quarter-final spot against AC Milan in the Italian Cup.

The Turin giants' 1-0 win over Cup rivals Cagliari left two of their players on the sidelines.

Danish international striker Nicklas Bendtner suffered a strain to a left thigh tendon that could keep him out for a few months while Chilean midfielder Arturo Vidal suffered bruising on his knee but should soon be on the mend.

However Juve coach Antonio Conte, back on the touchline after serving a four-month ban, said the setbacks will not affect their ambitions this season.

"I'm pleased we went through because we want to be challenging on all fronts," said Conte, who has been left a potential dilemma with Bendtner's injury.

The Dane was signed on loan from Arsenal till the end of the season but has failed to score in the little time he has played for the Old Lady.

"I was especially sorry for Bendtner, I would have liked to see him have a longer run-out," added Conte.

With statistics largely against them - Atalanta have failed to beat Juve in their past 15 games in Turin - the odds are stacked against the Bergamo side, who suffered a 3-0 rout to Rome in the Italian Cup on Tuesday.

A win for Juve would likely bring Inter back down from their cloud, especially if they fail to overcome the Biancocelesti on Saturday evening in Rome.

Lazio, who sit fourth on 30 points - eight adrift of Juve - are unbeaten at home since a shock 1-0 reverse to Genoa at the end of October and can get in among the top three places with a win.

While Inter have won three home games on the trot, the Nerazzurri have failed to win away in all competitions since a 3-1 Europa League defeat of Partizan Belgrade at the start of November.

Defender Juan Jesus made his Inter debut against Lazio last year and said: "The Lazio match will be a tough one.

"We claimed a huge win against Napoli (last week) and now we're closer to Juventus."

Inter coach Andrea Stramaccioni has no major injury worries although observers will be keen to see if he deploys forward Antonio Cassano.

Reports in midweek claimed that because of performance-related clauses in his contract, Cassano will pick up a bonus of 200,000 euros should he score or assist a total of 20 goals for the team.

Gazzetta dello Sport said Cassano will also be given the same amount if he makes 15 league appearances and he has appeared for Inter in 14 games so far.

AC Milan coach Massimiliano Allegri, meanwhile, will be looking to put all sentiment to the side when the Rossoneri host Pescara, with whom he played professionally, at the San Siro.

On their long-awaited return to the Italian top flight Pescara have spent much of the campaign trying to climb away from the relegation zone.

And it won't get any easier on what is their first match against AC Milan since the 1992-93 season, when Milan won 4-0.

After a disastrous start to the campaign Milan have enjoyed a resurgency of late to move up to seventh, and booked their place in the quarter-finals of the Italian Cup with a 3-0 rout of Reggina on Thursday.

Comments
Topics mentioned in this article
Lazio Inter Milan Nicklas Bendtner Napoli Genoa Chievo Juventus Juventus Stadium AC Milan Catania Chelsea Atalanta Fiorentina Manchester United Football
Get the latest updates on India vs Australia Series, check out the India vs Australia Schedule for 2020-21 and Ind vs Aus live score . Like us on Facebook or follow us on Twitter for more sports updates. You can also download the NDTV Cricket app for Android or iOS.