Juve coach Antonio Conte said that the win was the perfect response to the weekend's shock 2-1 loss to Sampdoria in Serie A. 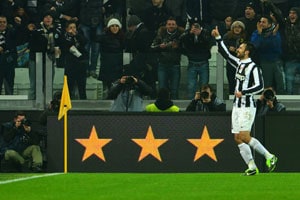 An extra-time strike by Mirko Vucinic gave Juventus a 2-1 victory over AC Milan on Wednesday and a place in the Italian Cup semi-finals.

Milan had taken a sixth-minute lead when top scorer Stephan El Shaarawy found the target after being set-up by fine approach work from Giampaolo Pazzini and Kevin-Prince Boateng.

But Juve were level six minutes later when Sebastian Giovinco curled a free-kick over the wall and into the top corner.

Juve coach Antonio Conte said that the win was the perfect response to the weekend's shock 2-1 loss to Sampdoria in Serie A.

"The lads knew what happened on Sunday should never happen again, not so much the defeat itself but for the manner in which it came," said Conte.

"Today I had a great response from everyone, in particular from those who have had fewer opportunities to show what they can do.

"Milan are a great team and sent out their best available starting line-up. We were determined to go through to the next round and managed to do so."