Jagielka gets Everton back on track

Everton bounced back from their shock FA Cup exit against Reading as Phil Jagielka's goal clinched a 2-1 win against Newcastle on Saturday. 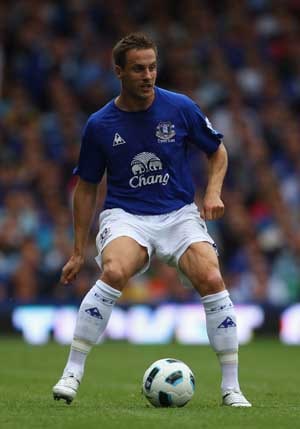 Everton bounced back from their shock FA Cup exit against Reading as Phil Jagielka's goal clinched a 2-1 win against Newcastle on Saturday.

David Moyes' side crashed out of the FA Cup fifth round after a lacklustre effort at home to Championship opposition, but the Toffees were able to make amends with a more convincing performance at St James' Park.

Leon Best had given Newcastle the lead in the first half but Leon Osman equalised before England defender Jagielka bagged the winner close to the interval.

Best thought he had snatched a draw when he headed past Tim Howard for a second time, but referee Howard Webb had spotted a push on Jagielka as the ball came across and disallowed the late effort.

After a scrappy start, it was Newcastle who took the lead from their first meaningful attack with 23 minutes gone.

Fabricio Coloccini's quickly-taken free-kick to Jonas Gutierrez caught the visitors napping and when the Argentinian's low cross was turned on to skipper Kevin Nolan by Mike Williamson, he powered a shot towards goal from a tight angle.

Howard could only parry the ball across goal to present Best with the simplest of tasks to head home his sixth of the season.

Newcastle's dominance was fleeting and Everton equalised in the 31st minute when Mikel Arteta laid a perfect pass for Osman to side-foot home with the help of a deflection off Jose Enrique.

It got even better for Everton in the 36th minute as Newcastle's defenders failed to deal with a Leighton Baines free-kick, giving Jagielka room to shoot home off the underside of the crossbar.

Newcastle boss Alan Pardew was forced into a reshuffle when Enrique limped off injured, with Danny Simpson taking over at left-back, Peter Lovenkrands dropping into midfield and substitute Shola Ameobi joining Best in attack.

The changes almost worked in Newcastle's favour had Williamson managed to turn Gutierrez's driven shot inside rather than outside the post in first-half injury time.

Newcastle goalkeeper Steve Harper had to make a smart save to keep out Jermaine Beckford's volley on the hour and Arteta might have sealed the win, but stabbed wide from close-range.

The hosts kept pressing for an equaliser but the closest they came was Best's effort in the 78th-minute which was ruled out for a push on Jagielka.

Comments
Topics mentioned in this article
Football Steven Gerrard Birmingham City Liverpool Chelsea Arsenal Everton Newcastle United
Get the latest updates on ICC T20 Worldcup 2022 and CWG 2022 check out the Schedule, Live Score and Medals Tally. Like us on Facebook or follow us on Twitter for more sports updates. You can also download the NDTV Cricket app for Android or iOS.