Italy are unbeaten after four opening games, having suffered their only setback in a 1-1 draw with group leaders Croatia in November. 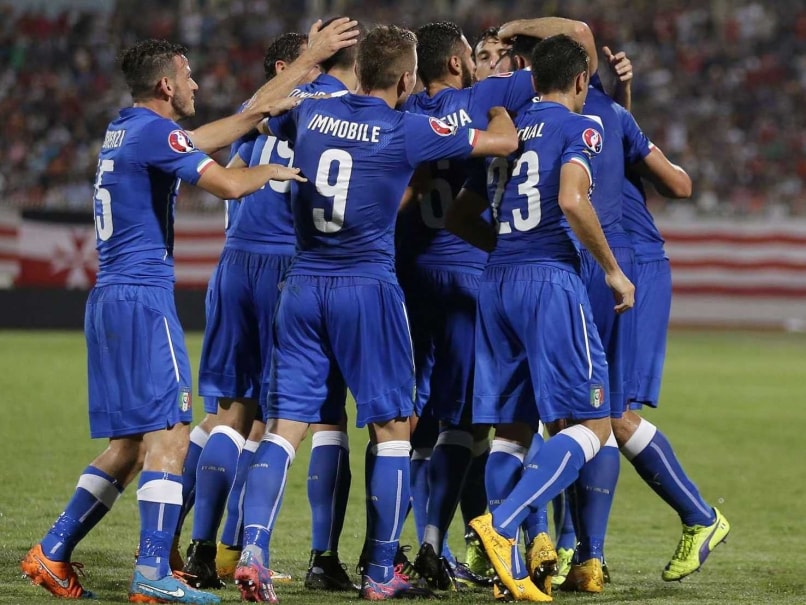 World Cup flops Italy look to continue their strong start to Euro 2016 qualifying when they face Bulgaria away in a Group H clash that could revive memories of coach Antonio Conte's spell at Juventus.

Italy are unbeaten after four opening games, having suffered their only setback in a 1-1 draw with group leaders Croatia in November.

Conte quit Juventus with three league titles to his name before inheriting the Azzurri helm from Cesare Prandelli following their disastrous, first-round exit from the World Cup in Brazil.

Those achievements, and his proximity to the nucleus of his current squad, appear to be bearing fruit as Conte seeks to lead Italy back on the road to success.

"Conte is the same as the person who coached Juventus, he hasn't changed since he made the switch," said Leonardo Bonucci, one of the five Juventus players expected to line up against Luboslav Penev's side in Sofia.

"He has very strong ideas about what football he wants to play and while he was at Juventus we honed our technical and tactical skills."

Although Juventus midfielder Andrea Pirlo is missing through injury, the Italian champions will be well represented.

A three-man Juventus defence of Giorgio Chiellini, Bonucci and Andrea Barzagli will line up in front of Juventus goalkeeper Gianluigi Buffon.

Juve's Claudio Marchisio was expected line up alongside Antonio Candreva of Lazio and Marco Verratti of Paris Saint Germain, but was ruled out for the rest of the season Friday with a knee ligament injury.

Verratti will replace Pirlo in the central midfield role, with Torino's Matteo Darmian and AC Milan's Luca Antontelli possibly occupying the wingback roles of which Conte was so fond while coach of the Bianconeri.

Fiorentina's Manuel Pasqual was ruled out with a rib injury on Friday, alongside Roma's Alessandro Florenzi (knee).

Verratti, who has scored twice for Italy in 10 appearances, admits it's a rare chance to showcase his potential on the international stage.

"I'm going to make the most of this opportunity," said Verratti.

"It's normal not to start out as first choice in the national team, it could hardly be any different when you have players like Pirlo and De Rossi ahead of you in the reckoning."

The big question from Italian fans ahead of Saturday concerns Conte's choice of strikers.

Simone Zaza -- a young and powerful front man who can score both in and outside the box -- could line up with Ciro Immobile, who has hit a rich vein of form for misfiring German Bundesliga outfit Borussia Dortmund.

But Conte has other options in Napoli's Manolo Gabbiadini and Graziano Pelle of Southampton. And the recent first-time call-ups of Argentinian-born Franco Vazquez and Eder, born in Brazil, have given Conte extra options, while igniting debate about who or who should not wear the Azzurro shirt.

"I believe an Italian player deserves to play in the national team, while those who are not born in Italy, even if they have Italian family, shouldn't have that right," said Inter Milan coach Roberto Mancini.

Vazquez and Eder were both born abroad to families who emigrated from the country several generations ago -- but both hold dual nationality and are eligible to play for Italy.

"There's no debate," said Carlo Tavecchio, the president of Italy's football federation (FIGC). "If a player has Italian citizenship, he is eligible. Conte has absolute freedom to select whoever he wants to play."

Following the World Cup debacle which sorely exposed Italy's reliance on erratic Liverpool striker Mario Balotelli, who has yet to be called up by Conte, the four-time World Cup winners are perhaps right to explore all their options.

Whoever lines up at the Vasil Levski stadium on Saturday will do so knowing Bulgaria have taken only four points from their four matches so far and were even held 1-1 by Malta last time out.

Comments
Topics mentioned in this article
Italy Andrea Pirlo Bulgaria Football
Get the latest updates on Fifa Worldcup 2022 and check out  Fifa World Cup Schedule, Stats and Live Cricket Score. Like us on Facebook or follow us on Twitter for more sports updates. You can also download the NDTV Cricket app for Android or iOS.