Sunil Chhetri scored in 25th, 40th 48th minutes respectively to register the second hat-trick of the season. With the win, Mumbai City FC has moved to second spot in the Indian Super League. 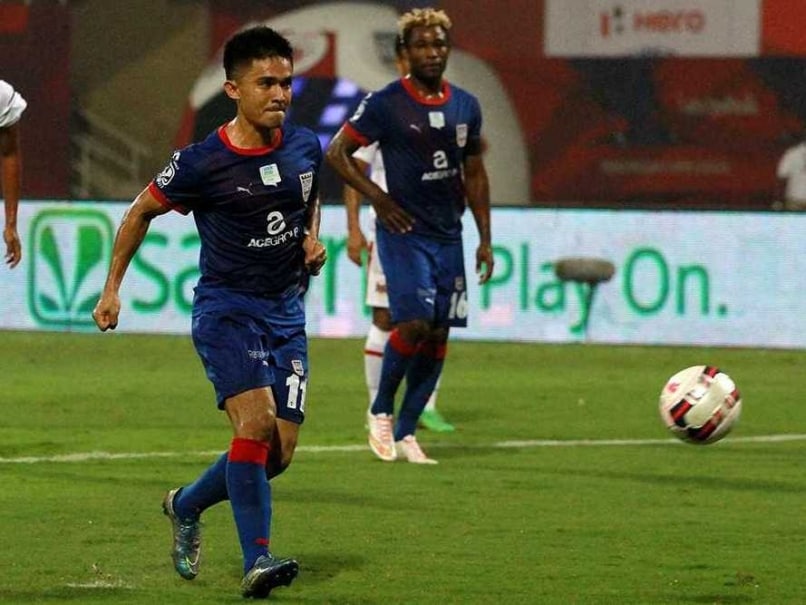 Chhetri, who once again combined very well with Haitian Sony Norde and compatriot Subash Singh, scored from the penalty-spot in the 25th and 48th minutes, while volleying home from close range in-between in the 40th minute, to complete the second hat-trick of the season. Chennayin FC's Steiven Mendoza had scored the first against FC Goa.

The triple strike took the diminutive Indian striker's tally of goals to six - the highest so far in the league this season - and included his double strike against Delhi Dynamos and a lone goal against FC Goa, both won 2-0 by Mumbai.

Then Norde finished off the match as a contest with a controlled strike in the 51st minute before fellow-Haitian team captain Frantz Bertin headed home three minutes from regulation time to complete NEU's humiliation.

NEU got their only goal of the game, which neutralized Chhetri's opening goal, through Boithang Haokip in the 29th minute, before playing second fiddle right till the end to the home team.

The third successive victory, all at home, propelled Mumbai to the second spot on the table. They have ten points now, two points behind leaders FC Pune City and level with FC Goa who have an inferior goal difference.

The defeat, NEU's fourth and all suffered away from home which broke their two-game winning sequence in Guwahati, left them stranded in seventh spot, one rung above cellar outfit Kerala Blasters, with 6 points.

Both teams missed a few half-chances to score before Mumbai shot into the lead in the 25th minute through a penalty award.

It came off a counter attack when a surprisingly unmarked Chhetri collected the ball on the right side of the field, darted into the penalty area and laid a measured pass to Subhash Singh on his right.

Subhash, without wasting time, crossed to the left. The ball struck the hand of a leaping defender Carlos Lopez leading to a penalty award which was coolly slotted home into the left corner of the goal by Chhetri, the India captain's fourth strike in the last three games.

However, Mumbai's joy of taking the lead was short-lived as four minutes later North East drew level through a fine, curling left-footed free-kick from the right of the area by homegrown talent -- Hoakip.

The ball swerved towards the goal, beating a couple of defenders forming the wall and India custodian Subrata Paul, who was rooted to his spot, on its way in.

The home team bounced back into the lead again five minutes before half time, with Chhetri again showing good positioning sense to soft-volley a left-footer in, past rival custodian Rehenesh Paramba, off a headed ball from the right across the goalmouth by Subash Singh.

It all started with a super chip from the left by Norde, who hood-winked a rival defender and found Subash on the right.

This trio of Mumbai players often sliced through the porous NEU defense to spell danger to the visitors' citadel, especially in the second half.

Changing ends, Mumbai virtually finished off the game as a contest by scoring two goals in four minutes with some quicksilver moves that left the rival defense exposed.

The first came via a penalty award, converted by Chhetri to complete his hat-trick, in the 48th minute after NEU's Spanish midfielder Andre Bikey handled the free-kick from Norde that came via Chhetri's legs.

Then Haitian Norde showed some magical tough on the left side to cut into the area and then sold a dummy to Rehenesh by delaying his shot a bit before coolly putting the ball past the hapless NEU goalkeeper.

Chhetri's on-the-run shot from just outside the area a few minutes later shook the cross-bar after Rehenesh's parried it.

Towards the closing stages overlapping defender Reagen Singh went on a solo run, showed excellent pair of heels with his acceleration but his shot was blocked by Paul.

At the other end Chhetri missed in an one-on-one situation against Rehenesh before Mumbai captain Frantz Bertin rose above a non-existent defense to head in his first and the team's final goal against a demoralised opposition.

The team members of Mumbai wore black arm bands to mourn the death of their France-based Tunisian midfielder Salim Benachour's father who passed away last Saturday.

Benachour had played in the previous game on Sunday but has departed for France. He's set to return tomorrow in time for Mumbai's next game here against defending champions Atletico Kolkata on November 1.

Comments
Topics mentioned in this article
Sunil Chhetri Football
Get the latest updates on India vs Australia and check out  Schedule, Results and Live Score. Like us on Facebook or follow us on Twitter for more sports updates. You can also download the NDTV Cricket app for Android or iOS.