The three points saw ATK go atop the table, tied on points with FC Goa with 33 points from 16 matches. 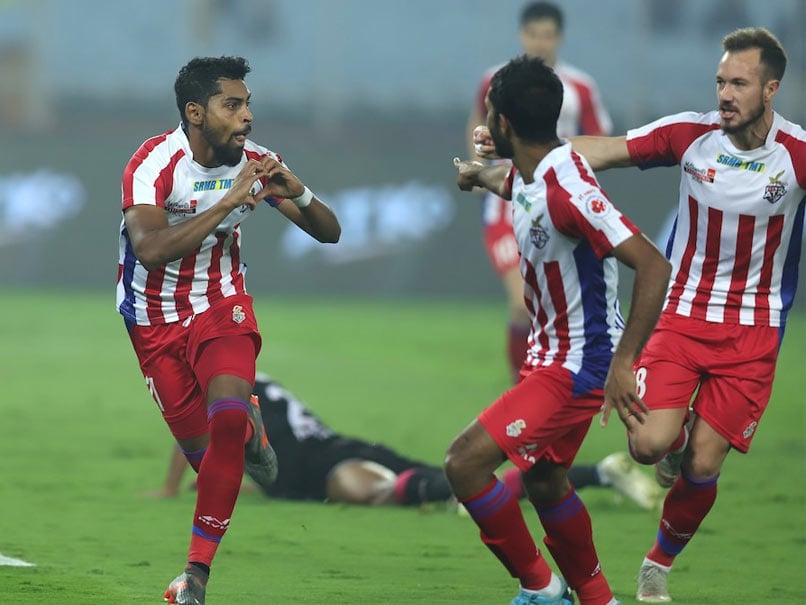 A hat-trick by Roy Krishna powered ATK to a 3-1 win over Odisha FC.© ISL

A hat-trick by Roy Krishna powered ATK to a 3-1 win over Odisha FC in the Indian Super League at the Salt Lake Stadium in Kolkata on Saturday. After a goalless first half, Krishna's brilliance (49', 60', 63') saw ATK surge to a 3-0 lead. Manuel Onwu pulled one back for Odisha (67') but it turned out to be just a consolation goal as ATK saw the game out quite comfortably. The three points saw ATK go atop the table, tied on points with FC Goa with 33 points from 16 matches. For Odisha, a third loss on the bounce dealt a huge blow to their play-off hopes, which is now hanging by a thread.

ATK made an energetic start to the game with Prabir Das and Krishna leading the way. The former sent in a dangerous cross into the box after the latter set him free, but Edu Garcia could not latch on to it.

Odisha slowly got to grips with the pace of the game, with Xisco Hernandez heavily involved. But alert defending from the home side meant Odisha could not fashion any clear-cut chances.

ATK continued to pose questions but were not able to make an impact in the final third.

However, the action livened up in the second half with Krishna running riot. He put ATK into the lead within four minutes of the restart after moving away from Narayan Das to meet a corner from Javier Hernandez. His sweetly struck shot at the far post gave no chance to Odisha goalkeeper Francisco Dorronsoro.

Odisha tried to mount a response and almost hit back immediately when Narayan picked out Xisco's run into the box. But the Spaniard's first-time hit went straight to ATK goalkeeper Arindam Bhattacharya.

Krishna made sure Odisha would regret that miss at the hour mark. A quick counter-attack saw Mandi Sosa send a long ball over the defence for Krishna. The Fijian striker outpaced Carlos Delgado before executing a brilliant dink over a stranded Dorronsoro.

Three minutes later, Krishna struck again to complete his hat-trick. Marcos Tebar gave away the ball on the right-wing to Jayesh Rane who picked out Krishna with a cross. The striker controlled it brilliantly before firing it in on the turn to register his 13th goal of the season.

Odisha were given hope of pulling off an unlikely comeback when Onwu directed Shubham Sarangi's cross from the right past Bhattacharya in the 67th minute to make it 3-1.

However, ATK managed to slow down the pace of the game and see off Odisha's response to go atop the table and confirm their place in the play-offs.