This was India's 13th win in 16th games and second on the bounce since the loss to Kyrgyz Republic. 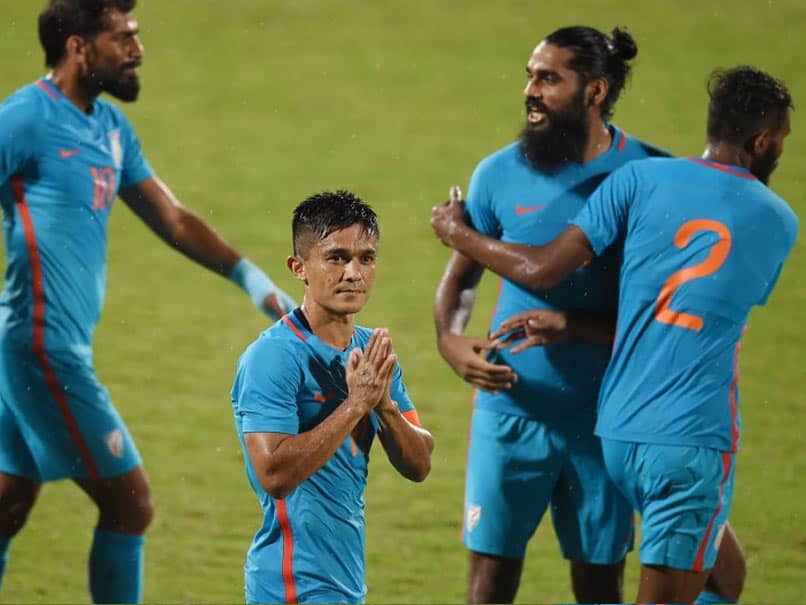 Captain Sunil Chhetri scored a brace on his 100th international game as Jeje Lalpekhlua also got on the scoresheet to help India outclass Kenya 3-0 and put one foot in the final of the Intercontinental Cup on a rain-soaked Monday night at the Mumbai Football Arena. After a barren first half which saw chances few and far between due to torrential downpour, Chhetri (68th minute penalty, 90+1) won and converted a penalty before adding to his tally in second-half added time with a delicate chip past the goalkeeper to round off the victory in front of 9,000 odd-spectators.

On either side of Chhetri's landmark double, Jeje (71st) made it 2-0 as India bagged two wins in as many games and moved to six points.

The top two teams in the points table will meet in the summit clash on Sunday. This was India's 13th win in 16th games and second on the bounce since the loss to Kyrgyz Republic. Both sides struggled for cohesion in the first period as it rained profusely.

In the 25th minute, Chhetri tried to take advantage of a sloppy clearance and chip the ball over retreating Kenyan goalkeeper Patrick Matasi but his effort went just over the crossbar.

Kenya looked the better side in a scrappy 45 minutes as Chhetri chased down another Subashish Bose long ball but Matasi averted the danger on the edge of the box.

Towards the end of the first period, the rain looked to relent as both teams headed towards the tunnel.

Kenya got two gilt-edged chances early on after the break, but Ovella Ochieng and Pistone Mutamba dragged wide of target with the Indian centre-back pairing of Anas Edathodika and Sandesh Jhingan carved open far too easily.

At the other end, Halicharan Narzary did well to elude his marker on the left flank and cross for Chhetri inside the box, but the latter failed to connect properly.

Minutes later, Chhetri had another opportunity to get his name on the scoresheet, but the Bengaluru FC marksman volleyed wide from a good position inside the area.

Just after the hour mark, Pronay Halder -- who scored his first goal for India in the last game -- unleashed a curling long ranger which drew a brilliant save from Matasi.

Soon after, Chhetri won a controversial penalty as replays showed Kenyan defender Michael Kibwage bringing him down just outside the box.

The referee, nonetheless, pointed to the spot and Delhi boy made no mistake from 12 yards despite Matasi getting a hand to the ball.

Three minutes later Jeje doubled India's tally, rifling a rebound into the top corner from the edge of the box.

It was picture perfect in the end when Chhetri linked up with substitute Balwant Singh to run clear and dink the ball past Matasi.

India Sunil Chhetri Football India vs Kenya, Match 3
Get the latest updates on India vs Australia Series, check out the India vs Australia Schedule for 2020-21 and Ind vs Aus live score . Like us on Facebook or follow us on Twitter for more sports updates. You can also download the NDTV Cricket app for Android or iOS.