Inter Milan earned the bragging rights over city rivals AC Milan on Saturday with an emphatic 3-1 victory away to Juventus which stopped the champions' impressive unbeaten run at 49 games. 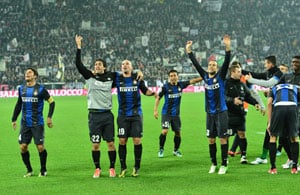 Inter Milan earned the bragging rights over city rivals AC Milan on Saturday with an emphatic 3-1 victory away to Juventus which stopped the champions' impressive unbeaten run at 49 games.

Earlier, seven-times European champions AC Milan, who have been languishing in mid-table and beyond since the start of the season, moved up a gear at the San Siro to register a 5-1 win over struggling Chievo.

Milan's fourth win in 11 games has moved them up to seventh ahead of Sunday's matches and will prove a morale-booster ahead of the visit of Champions League Group C opponents Malaga on Tuesday.

Embattled coach Massimiliano Allegri, who has survived several virtual votes of confidence this season having led Milan to the title in 2011 and runner-up place last season, admitted this result was more than welcome.

"After our crisis period we needed a result like this but it's one we deserved," he said.

"We still have improvements to make in some areas but we're going in the right direction and hopefully we will make something of this season, which did not start well for us."

The Nerazzurri themselves endured a sluggish start to the season but 36-year-old Inter coach Andrea Stramaccioni has brought his side to the boil in timely fashion.

The build-up to the 'Derby d'Italia' lasted more than two weeks and led, in the closing days, to exchanges between both clubs that threatened to boil over.

While Juve cancelled two scheduled press conferences earlier this week, Inter have been forthcoming about their ambitions and plans.

Inter's win allowed Stramaccioni to vent some of his frustration at what he felt was "ironic" remarks on the part of Juventus president Beppe Marotta.

"I've heard some ironic remarks about how we go about things," he told Sky Sports.

"I tried to prepare for this game in the best possible way so it's annoying to hear sarcasm from Juve before the match on Inter's tactical approach. At the final whistle perhaps Marotta might think differently. I just want respect."

In 10 previous games this season Juve had conceded only five goals.

But despite opening the scoring through Chilean Arturo Vidal in a dominant first half the Turin giants were outplayed after the interval with Diego Milito grabbing a brace and Rodrigo Palacio scoring the third in the 89th minute.

Inter are now just one point behind Juventus, with Napoli -- unbeaten until two weeks ago when they visited Juventus Stadium -- six points off the lead before they host Torino Sunday.

Juventus came out firing on all cylinders and should have had three quick goals but it was their first-minute opener that hit the net. 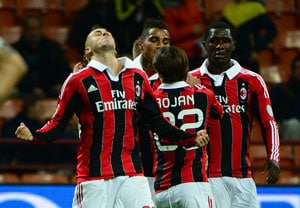 Officials, however, failed to spot the infringement and when he lashed the ball across the area Vidal slotted home past Samir Handanovic.

Both teams had their chances in the first half but Inter moved up a gear in the second period as doubt began to creep in to Juve.

Inter's break came when they were awarded a penalty just before the hour mark.

Milito stepped up to send the ball just past Buffon's shoulders to level and then made it two a quarter of an hour later when he latched onto the rebound from a fierce drive by second half substitute Freddy Guarin to beat Buffon.

Juve's chances of salvaging a draw were kept in check when Rodrigo Palacio finished off the good work of Yuto Nagatomo to handed Juve their first league defeat since a reverse against Parma in May 2011.

"It was a tough game," Milito told Sky Sport.

"We were caught napping at the start and went immediately behind but then we fought our way back into it and at the end we deserved the win."

Comments
Topics mentioned in this article
AC Milan Juventus Inter Milan Football
Get the latest updates on IPL 2021, IPL Points Table , IPL Schedule 2021 , live score . Like us on Facebook or follow us on Twitter for more sports updates. You can also download the NDTV Cricket app for Android or iOS.