Holders Inter Milan reached the Champions League quarterfinals after a dramatic 3-2 win at Bayern Munich in Tuesday's Last 16 second-leg clash put them through on the away-goals rule. 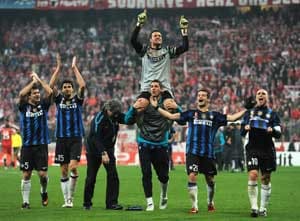 Holders Inter Milan reached the Champions League quarterfinals after a dramatic 3-2 win at Bayern Munich in Tuesday's Last 16 second-leg clash put them through on the away-goals rule.

It ended 3-3 on aggregate after goals by Bayern's Mario Gomez and Thomas Mueller were cancelled out by Inter's Samuel Eto'o and Wesley Sneijder before Goran Pandev scored the Italians' crucial third in the 88th minute.

"It's a big relief for us, because Bayern also came into this match thinking they could win," said Inter defender Esteban Cambiasso.

"We got off to the ideal start, although things didn't then go our way, we kept our belief.

"(Inter goalkeeper) Julio Cesar thought he had lost the game for us at half-time, so I am pleased for both him and Pandev.

"There is plenty of heart and enthusiasm in this team, we can go onto something big."

For Bayern coach Louis van Gaal, whose contract will be terminated at the end of the season, it had been all too predictable.

"We threw it away, not for the first time this season," said the Dutchman who ruled out resigning in the wake of the defeat and says he wants to "help pull the players out of the hole they are in".

Italian delight was tempered by the Germans' bitter disappointment.

"We have played too passively and made too many mistakes at the end," said a visibly disappointed Gomez.

"We didn't finish our chances to counter-attack, you can't do something like that against a team like that without being punished."

Dutch winger Arjen Robben was just as stunned by the result.

"It is unbelievable, I don't know how it came to this," said Robben.

"We made individual concentration errors, but it could still have been 4-1 at half-time.

"It doesn't seem possible that we could concede three goals against a side like that.

"I do not know how we can save the season, apart from making sure we qualify for the Champions League next season."

The slender first-leg lead Bayern had worked so hard to earn was cancelled out after just four minutes when the Munich defence unwisely allowed Eto'o a free run at goalkeeper Thomas Kraft.

The 30-year-old Cameroon star needed no second invite to plant his shot firmly in the back of the net for his 32nd goal of the season to level on aggregate.

But Bayern refused to panic, as they have so often done this season, and worked hard to turn their possession into chances.

They made it 1-1 on the night when Dutch winger Arjen Robben fired in a cross which Milan goalkeeper Julio Cesar fumbled and the ball into the path of Germany striker Gomez.

The Bayern star, the scorer of the goal in the first-leg, shielded the ball with his body before flicking it over his head and into the empty goal on 21 minutes.

It was his eighth Champions League goal of the season and his 29th in all competitions.

Then with half an hour gone, Bayern took the lead when Robben threaded a pass through the Milan defence for German international midfielder Mueller to give Bayern a 2-1 lead.

It should have been 3-1 in the 34th minute when French winger Franck Ribery beat his marker and was left to sprint unhindered into the Inter area, but he fired over both Cesar and the crossbar.

And somehow the ball stayed out when Mueller lunged in a goal-mouth scramble with Cesar and hit the post before bouncing back into play leaving a dismayed Mueller to contemplate what might have been.

With half-time approaching Sneijder fired just over the Bayern net from a direct free-kick in a frantic first 45 minutes.

The game's tempo dropped after the break, but Bayern kept up the pressure as Gomez fired at Cesar with an hour on the clock.

Sneijder then put his side level on the night in the 63rd minute when Eto'o squared the ball for the Dutchman to drill his shot into the back of the Bayern net from the edge of the penalty area.

Pandev scored the winner with two minutes left when Eto'o squared the ball into the path of the Macedonian striker whose shot gave Kraft no chance and Milan march on towards the final on May 28.

Comments
Topics mentioned in this article
Football Inter Milan Bayern Munchen
Get the latest updates on ICC T20 Worldcup 2022 and CWG 2022 check out the Schedule, Live Score and Medals Tally. Like us on Facebook or follow us on Twitter for more sports updates. You can also download the NDTV Cricket app for Android or iOS.