Injured Bale out of England clash

Welsh hopes of scoring an upset over England in this weekend's Euro 2012 qualifier have suffered a major blow after the withdrawal of Gareth Bale with a hamstring injury, it was confirmed on Thursday. 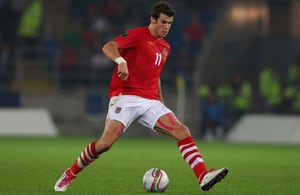 Welsh hopes of scoring an upset over England in this weekend's Euro 2012 qualifier have suffered a major blow after the withdrawal of Gareth Bale with a hamstring injury, it was confirmed on Thursday.

The Tottenham winger has suffered a recurrence of an injury which had been bothering the player before he joined up with the Wales squad ahead of Saturday's encounter at the Millennium Stadium, a statement said.

"Due to a hamstring problem, Gareth Bale has had to withdraw from the Wales squad to face England on Saturday," the Football Association of Wales said.

"He felt tight last week during training with his club. After playing 90 minutes on Saturday he felt some muscle tightness. Initially, this was expected to be muscle soreness after playing his first game.

"On joining-up with the Welsh squad he was kept off his feet in training for two days to recover. As he still felt tight in the warm-up on Tuesday, Gareth was pulled-out of the session.

"He did not train at all on Wednesday and was sent for a scan. The scan revealed that Gareth picked-up his injury last week."

Bale had only recently returned to action for Spurs after a six-week lay-off with a back injury before being hit with a hamstring problem.

Bale's absence deprives Wales of one of their main attacking outlets.

The flying winger has been in outstanding form for Tottenham this season, most notably in the Champions League where he single-handedly destroyed Inter Milan in a victory at White Hart Lane.

Comments
Topics mentioned in this article
Football Gareth Bale Tottenham Hotspur England Cricket Team Australia Cricket Team West Indies Cricket Team Tim Cahill Mark Schwarzer
Get the latest updates on ICC T20 Worldcup 2022 and CWG 2022 check out the Schedule, Live Score and Medals Tally. Like us on Facebook or follow us on Twitter for more sports updates. You can also download the NDTV Cricket app for Android or iOS.