After becoming the first Indian footballer to sign for a La Liga club, Ishan Pandita will now play for the Leganes U-19 team in the Division de Honor Juvenil 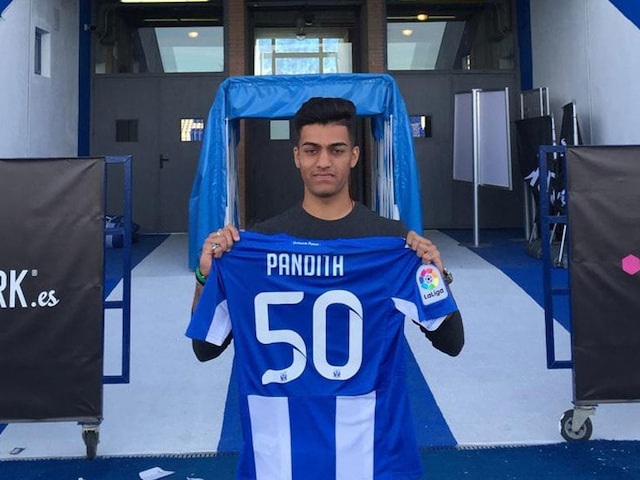 Ishan Pandita will start off his Leganes career in the club's U-19 side. (Photo: Ishan Pandita/Facebook)© Facebook

In a significant development for football in India, young forward Ishan Pandita signed a one-year contract with Spanish top-flight club CD Leganes, becoming the first player from the country to sign a professional contract with a La Liga club.

Pandita, who hails from Bengaluru, will play for the Leganes U-19 team in the Division de Honor Juvenil. Leganes are in Group V in the league this season, and have been placed alongside Real Madrid and Atletico Madrid.

With six points from four games, Leganes are currently placed at eighth in the 16-team group, and Pandita will hope to help his side climb up the league table in upcoming games.

Pandita had earlier been part of UD Almeria's youth setup after moving to Spain from Bangalore. He had also given a trial at Getafe, but a possible move to the Madrid-based club fell through after their relegation to the second tier last season.

"My first goal is to get some game-time and score a few goals. If I can progress from the youth team and debut for the first team before the end of the season, that will be great," Ishan Pandita was quoted as saying by The Hindu.

Having shifted base to Spain three years back, Pandita is relishing the prospect of turning out in the blue-and-white shirt of Leganes. "It's been a tough, hard three years in Spain but at end, it was all worth it," he told Times of India.

AIFF President Praful Patel took to Twitter to congratulate Pandita on his move to Leganes, terming it as a 'landmark achievement'.

Heartiest congratulations to Ishan Pandita, first Indian to sign for Spanish @LaLiga club. A landmark achievement at such a young age.

Comments
Topics mentioned in this article
Football , 1900-01-01 ,
Get the latest updates on IPL 2020, check out the IPL Schedule for 2020 and Indian Premier League (IPL) Cricket live score . Like us on Facebook or follow us on Twitter for more sports updates. You can also download the NDTV Cricket app for Android or iOS.