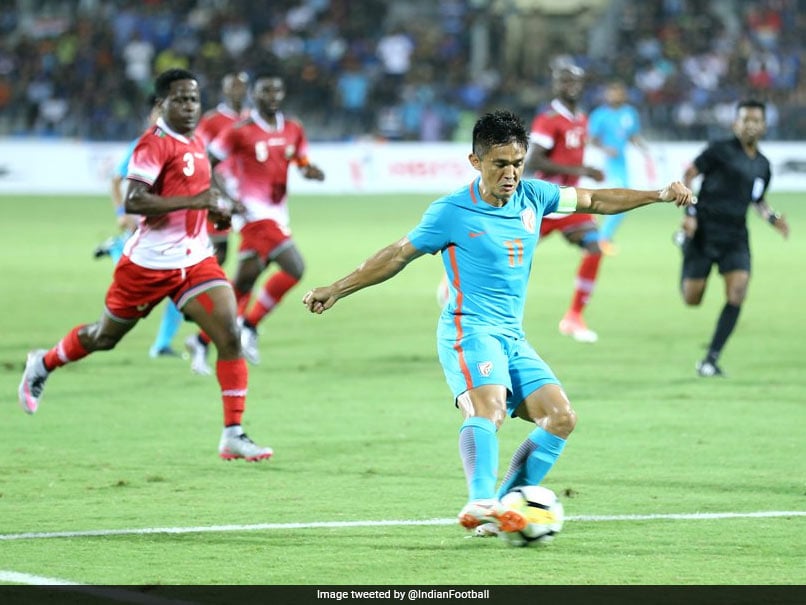 Skipper Sunil Chhetri continued his superb form, striking a brace as India thrashed Kenya 2-0 to clinch the Intercontinental Cup at the Mumbai Football Arena here on Sunday. Chhetri, who scored in the eighth and 29th minutes to hand India a convincing victory, also equalled Argentina's Lionel Messi's tally of 64 international goals, making him the joint-second active international goalscorer behind Portugal's Cristiano Ronaldo (81 goals). With the stadium jam-packed with Indian fans, the hosts started on an aggressive note as they penetrated the Kenyan defense twice in the first minute.

The hosts took an early lead when a free kick from Anirudh Thapa was flicked perfectly by skipper Sunil Chhetri into the net.

After conceding the goal, Kenya regrouped and started to counter-attack. Jockins Atudo, who scored twice in the last match, was not too effective on Sunday thanks to some brilliant marking by the Indian defenders.

Unpetrubed by the Kenyan pressing, India continued playing offensively and as a result Chhetri scored with a superb finish just before the half hour mark to double India's lead.

Defender Anas Edathodika lofted a long ball and Chhetri beat the offside trap to chest-trap the ball before slamming an accurate left-footer low into the far corner.

The desperate Kenyans kept on creating attacks at regular intervals but were let tried down by poor finishing.

Bernard Oginga, who enjoyed a lot of ball possession, struggled to beat the Indian defenders and also received a yellow card for his efforts.

Kenya started the second half on an attacking note as Otieno Ochieng almost netted the first goal for Kenya with a viciously curling long ranger. But Indian goalkepper Gurpreet Sandhu pulled off an excellent diving save to keep out the brilliant effort.

In the 60th minute, Kenya was unfortunate to miss another chance as another long range effort from Ochieng failed to beat Gurpreet, who used both his fists to punch the ball out.

The visitors were once again was on the verge of opening their account in the 71st minute but Dennis Odhiambo failed to get past Sandhu.

There was no stopping for Sandhu tonight as the keeper saved yet again six-minutes later off Ochieng's strike.

The final few minutes saw India desperately defend their citadel and making a string of substitutions.

Kenya Sunil Chhetri India vs Kenya, Final
Get the latest updates on Fifa Worldcup 2022 and check out  Fifa World Cup Schedule, Stats and Live Cricket Score. Like us on Facebook or follow us on Twitter for more sports updates. You can also download the NDTV Cricket app for Android or iOS.