From a 2-1 lead at half-time, Sunil Chhetri-led India suffered a 3-2 defeat to Palastine at Siliguri. 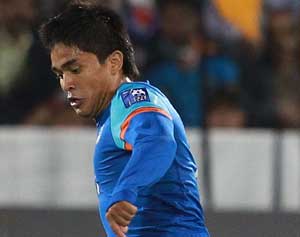 The Indian football team squandered a first-half lead to eventually go down to AFC Challenge Cup Champions Palestine 2-3 in an International friendly in Siliguri on Monday.

India led 2-1 at the interval at the Kanchenjunga Stadium.

Down by an early 8th minute goal, India displayed character to overturn the table by the interval, courtesy goals from captain Sunil Chhetri and Francis Fernandes. But Wridat Ahmed and Khader Abuhammad scored one apiece for Palestine in the second half to settle the issue for the visitors.

Palestine seized the initiative early. Apart from an early flourish in the 3rd minute where the Palestine goalkeeper Ramzi Saleh, also the captain, managed to palm away a dangerously curling free-kick before Arnab Mondal could outjump him, Palestine pushed India back into their own half for the first 10 minutes.

The efforts bore fruit when the skillful Ashraf Alfawaghra reacted faster to tap in from a melee in the 8th minute.

India tried to steady the ship thereafter. Play was switched from one flank to the other as India tried to slow down the proceedings. Clifford Miranda's run down the left in the 24th minute split open the Palestine defence. Clifford sped past Raed Abusalah, entered the box but Abdullatif Albahdari intercepted it earlier than the Robin-Sunil duo.

If that was a bit lucky, Fernandes' strike in the 36th minutes was a combination of opportunism and class. One of Robin's shot bounced off Saleh and Francis, following it up, sidestepped past Saleh and slotted home as India went into the interval enjoying a 2-1 lead.

Immediately after resumption, Subrata Paul tipped over a dangerously dipping freekick from Ashraf. But Ashraf eventually managed to do what he intended. The very next minute, he took it past Raju Gaikwad, evaded Arnab and laid it for Wridat to slap it past a diving Subrata.

If that wasn't enough, Ashraf feinted past Arnab and Raju and even as he pulled the trigger, Arnab managed to recover in time.

India retaliated in style as Clifford went past all and even as his floater was about to be headed in by an onrushing Francis, Albahdari managed to shield him in time.

India had regrouped by then with the trio of Lenny Rodrigues, Chhetri and Robin keeping the rivals guessing. But Palestine surged into the lead again in the 72nd minute - this time Khader Abuhhamd's harmless shot deflected off Arnab Mondal and changed direction much to the frustration of Paul.

Koevermans made his first substitution in the 75th minute - Arata Izumi replacing Lenny and then Seiminlen Doungel coming in for Miranda in the 80th minute. But Palestine managed to hold fort despite some desperate attempts from India in the last 10 minutes.