Boubacar Diarra scored the only goal of the match in the 62nd minute as Neroca FC climbed to sixth spot in the I-League table with eight points. 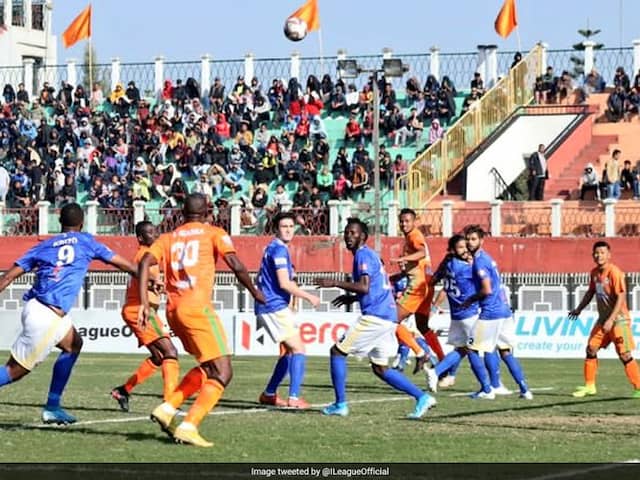 Neroca FC registered a hard-fought 1-0 victory over Real Kashmir FC at the Khuman Lumpak Stadium on Tuesday. Boubacar Diarra scored the winner of the match in the 62nd minute. Neroca FC head coach Gift Raikhan, seemingly desperate for a change in fortunes, made wholesale changes to his line-up for the I-League clash. Dhananjoy Singh and Roshan Singh started at the back, while Imran Khan and Siam Hanghal formed the pivot in the midfield. Varun Thokchom and Pritam Singh started on the flanks, with Boubacar Diarra and Zico Sekle spearheading the attack.

David Robertson made just a solitary change to his side, with Farhan Ganie starting ahead of Altamash Sayed, with the remainder of his 4-5-1 remaining unchanged.

Neroca kicked-off the proceedings, looking to draw first blood and in the seventh minute came close to doing so when a Siam Hanghal set-piece on the right flank wasn't dealt with properly inside the box. This allowed Taryk Sampson a crack at the goal on the edge of the six-yard area, but the young defender failed to keep his composure and fired wide much to Kashmir goalkeeper Tempa Lachenpa's relief.

It was Hanghal again, in the 10th minute, when he crafted an inch-perfect cross into the box for Diarra who had a free header on goal from barely a couple of yards out but who missed an absolute sitter letting Kashmir off the hook once again.

The visitors had their first attempt on goal in the 17th minute, when a scramble in the Neroca box led to the ball falling to Gnohere Krizo, who pulled the trigger from point-blank range but Neroca were bailed by a stunning save from their skipper Marvin Devon Phillip.

Real Kashmir had another golden opportunity in the 34th minute when a Mason Robertson delivery found Krizo unmarked, but the chance went begging as he headed over the bar with the goal gaping wide.

Gift Raikhan's men had another chance to break the deadlock, this time in the first minute of first-half stoppage time, when Diarra was through on goal and with only the keeper to beat, fired his shot straight at him leaving the two teams level at the break.

The Snow Leopards came out in the second half with more intent and had the better of the opening exchanges, which led to them coming close with Krizo in the mix yet again, who did well to get to the end of a Kallum Higginbotham cross, forcing Devon Phillip into making an outstanding fingertip save.

However, it was Neroca who broke the deadlock in the 62nd minute when a Pritam Singh cross was replied to with a looping header from Diarra which left Lachenpa back-pedalling and helpless as the Khuman Lumpak stadium erupted in celebration.

David Robertson's side kept pushing hard and continued to threaten through set-pieces. In the 81st minute, Mason Robertson showed his athletic prowess and pulled off a diving header which would make any forward proud, to get to the end of a Higginbotham corner, but Devon Phillip wasn't in any mood to let anything past him, pulling off yet another stunning save.

The referee blew for full-time, as Neroca registered their second win of the campaign, climbing to sixth in the table with eight points, while Real Kashmir's woes continued, dropping to tenth with six points.

Courtesy of his outstanding display between the sticks, Neroca skipper and custodian Marvin Devon Phillip was adjudged to be the Man of the Match.