East Bengal rode on Do Dong-Hyun's brace to defeat Mohun Bagan and reach 23 points in 12 matches. Bagan still lead the 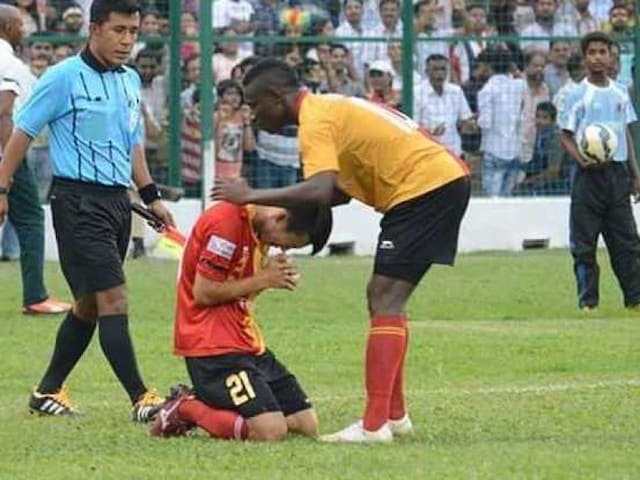 First half substitute Dong-hyun scored from the spot in 40th minute and then added another in 75th minute for the 'home side' East Bengal, while Mohun Bagan captain Katsumi Yusa pulled one back in the 83rd minute. The match could have ended 2-2 but Mohun Bagan but India striker Jeje Lalpekhlua wasted a penalty in the injury time.

Mohun Bagan assistant manager Shankar Lal Chakrabarti, who was standing for Sanjoy Sen - banned by the AIFF for four matches - was also sent off by the referee for protesting against the penalty given to East Bengal to add drama to the match played at Kanchanjangha Stadium, which served as the derby venue after Salt Lake stadium in Kolkata has been locked down for the 2017 Under-17 FIFA World Cup.

The win took East Bengal to second spot with 23 points from 12 matches, while Mohun Bagan still lead the league standings with 25 points but having played one more match.

The two Kolkata giants and 2014-15 champions Bengaluru FC are now in a three-way tussle for the title in the nine-team (16-round) league.

It was a heartbreak for Mohun Bagan as they thought the referee was harsh on them while giving the penalty against them in the 40th minute after defender Luciano tugged East Bengal striker Ranty Martins' shirt inside the box in a tussle and it was a touch-and-go situation.

Referee Santosh Kumar Muringothumalil pointed to the dreaded spot and Mohun Bagan players made a strong protest, surrounding and arguing with him, apparently trying to convince him that it was a slight tugging which defenders resort to on many occasions while defending their citadel.

Luciano was even seen to be gesturing to the referee to keep quite and think over by pointing his index finger on his own head.

The Mohun Bagan players were also apparently trying to convince the referee that Martins handled the ball but to no avail as Luciano was yellow-carded and Dong-hyun cooly stepped up to take the spot kick and send the ball into the net to the wild celebration of East Bengal fans.

Dong-hyun, who came in place of Abhinash Ruidas in the 33rd minute, emerged as the star of the day as he made it 2-0 in favour of East Bengal in the 75th minute.

The South Korean winger got the better of Mohun Bagan defender Kinshuk Debanath and then fired the ball past goalkeeper Debjit Ghosh to score his second goal.

It was still not over for Mohun Bagan as captain Katsumi rose to connect a Pritam Kotal cross from the right into the East Bengal goal in the 83rd minute.

Seven minutes were added as injury time and Mohun Bagan had a chance to come out unscathed in the match but to the dismay of the vociferous supporters, Jeje Lalpekhlua, who captained India against Iran and Turkmenistan in the 2018 World Qualifiers, simply sent a weak push to East Bengal goalkeeper Luis Barreto in the 95th minute to waste a golden opportunity.