Paolo Rossi died after a long illness on Wednesday aged 64 prompted an outpouring of national grief and tributes, and in particular in Vicenza, the northeastern city whose football team he lifted into Serie A. 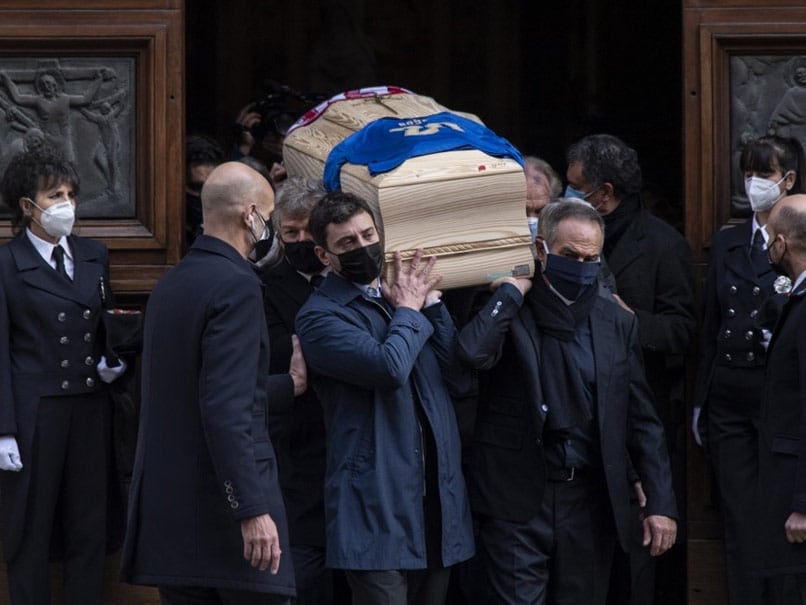 Hundreds gathered to bid farewell to Italy's 1982 World Cup hero Paolo Rossi during an emotional funeral ceremony in Vicenza Cathedral on Saturday. Rossi's World Cup-winning teammates carried the simple wooden coffin of the forward known as 'Pablito' before and after the ceremony in the city's Duomo. "If I am world champion I owe it to him," said former Italy defender Fulvio Collovati. Rossi fired the Azzurri to their third World Cup triumph in Spain with his six goals, winning the Ballon d'Or the same year.

His death after a long illness on Wednesday aged 64 prompted an outpouring of national grief and tributes, and in particular in Vicenza, the northeastern city whose football team he lifted into Serie A.

Thousands had flocked to pay their respects at Vicenza's Stadio Menti on Friday where Rossi's coffin had been on public display.

And on Saturday, hundreds gathered outside the city's Duomo with 250 people allowed attend amid Covid-19 restrictions, with the ceremony broadcast live on national television.

"I didn't just lose a teammate, but a friend, a brother," former Italy defender Antonio Cabrini said during the ceremony.

"Together we fought and won, sometimes lost, always with the desire to get back up. We were part of a group.

"We did not think that you would leave that group of ours so soon. Ciao Paolo!"

The World Cup players were joined by Rossi's son Alessandro carrying the coffin with his wife Federica and daughters Sofia Elena and Maria Vittoria following.

A large replica of the Gazzetta dello Sport front page the day after Italy's famous 3-1 victory over Germany in the World Cup final, where Rossi scored the opening goal, was placed at the Cathedral entrance.

The Azzurri team jersey with the number 20 was placed on coffin, along with the Vicenza team scarf.

After the ceremony there was a long applause, accompanied by the bells of Vicenza Cathedral, while outside people chanted "Paolo, Paolo...".

Rossi will be cremated with his ashes returned to his native Tuscany, his wife said this week.

"Paolo was a lot of things to me. He was a hero as a 14-year-old. For all Italians is a myth," said former Italy international Paolo Maldini, among the many past and present Azzurri stars in the congregation.

A slight winger who converted to centre-forward, Rossi won the hearts of Italian fans when his goals propelled Enzo Bearzot's Azzurri -- who started the tournament with three uninspiring draws -- to a third world title.

But he almost missed the whole tournament.

In 1980, he was caught up in match-fixing scandal known as "Totonero" -- a play on the Italian for football pools -- that also led to top teams including AC Milan and Lazio being relegated.

After protesting his innocence he was cleared to play again and was rehired by Juventus, going on to earn his spot in the World Cup squad.

He scored a hat-trick in the 3-2 defeat of Brazil, a brace in a 2-0 semi-final win over Poland, and the opening goal in the 3-1 victory over West Germany in the final.

Along with Christian Vieri and Roberto Baggio, Rossi holds the Italian record for nine goals scored in the World Cup.

Born in Prato in Tuscany, Rossi made his professional debut at Juventus in 1973, but his initial two-year spell at the Turin club was blighted by knee injuries.

His first successes were with Vicenza, helping the club into the top flight. However, following relegation he left for a loan spell at Perugia, where scandal struck.

After his suspension Rossi returned to Juve, and the 1983-1984 season was his most successful at club level.

In 1985, Juve won the European Cup amid the tragedy of the Heysel Stadium final against Liverpool, where 39 fans were killed. It was to be Rossi's last match with the Bianconeri.

He went to rivals AC Milan for an unsuccessful season which was overshadowed by injury, as was his final year at Hellas Verona.

Italy Football
Get the latest updates on SA vs IND 2021-22, check out the Schedule and Live Score . Like us on Facebook or follow us on Twitter for more sports updates. You can also download the NDTV Cricket app for Android or iOS.