Henning Berg's debut as Blackburn manager ended in a disappointing defeat as Championship promotion rivals Crystal Palace cruised to a 2-0 victory at Selhurst Park on Saturday. 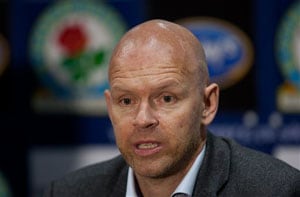 Henning Berg's debut as Blackburn manager ended in a disappointing defeat as Championship promotion rivals Crystal Palace cruised to a 2-0 victory at Selhurst Park on Saturday.

Former Norway defender Berg, who won the Premier League title with Blackburn in 1995, was taking charge of Rovers for the first time following his appointment on Wednesday.

After a lengthy search for a replacement for Steve Kean, who quit in September following a miserable reign that included relegation from the Premier League last season, Venky's -- the Indian poultry firm who own Blackburn -- plumped for Berg as the man to lead the team back into the top-flight.

Berg famously claimed last season that no manager of substance would take the Blackburn job and, on this evidence, the former Manchester United star will have to display a managerial midas touch to win promotion this season.

Third-placed Palace were also trying to impress a new manager -- Ian Holloway's arrival as successor to Dougie Freedman was confirmed just hours before kick-off -- and they did a much more convincing job than Blackburn's players.

Former Blackpool boss Holloway watched from the stands, before officially taking charge on Monday, as Glenn Murray headed Palace into the lead with a header from Owen Garvan's free-kick on the stroke of half-time.

Murray doubled Palace's advantage with a 65th minute penalty and also had another spot-kick saved by Rovers goalkeeper Paul Robinson as Blackburn dropped to sixth place.

Ipswich's new manager Mick McCarthy fared better than Berg as the former Wolves and Sunderland boss inspired the division's bottom club to a 1-0 win at Birmingham.

McCarthy only took over on Thursday but his impact has been instant, with former Birmingham striker DJ Campbell scoring the only goal of the game after eight minutes to give Ipswich their first win in 13 attempts.

Sean Dyche's reign as Burnley manager also got off to a fine start with a 2-0 home win against Wolves.

With leaders Cardiff beaten 2-1 at Bolton in Saturday's late game, Middlesbrough seized the chance to move level on points at the top by thrashing Charlton 4-1 at the Valley.

Kenny Jackett celebrated five years as Millwall manager in style after seeing his side extend their unbeaten run to seven league games with a 4-1 rout of Nottingham Forest at the City Ground.

Elsewhere, promotion hopefuls Leicester slipped to a 2-1 defeat at Watford, while Hull remain in the play-off places after a 1-0 win over Barnsley.

Comments
Topics mentioned in this article
Football Blackburn Rovers Crystal Palace
Get the latest Cricket news, check out the India cricket schedule, Cricket live score . Like us on Facebook or follow us on Twitter for more sports updates. You can also download the NDTV Cricket app for Android or iOS.