Granada vs Barcelona: With seven points on the board, this is Barcelona's worst start to a season since 1994. 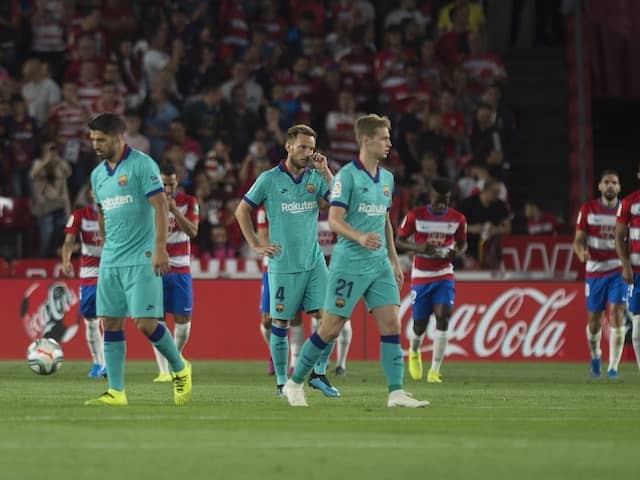 Granada vs Barcelona: The Catalan giants have now won only two of their opening five league games.© AFP

Barcelona threw on their stars of the present and the future on Saturday but neither Lionel Messi nor Ansu Fati could save them from a dismal 2-0 defeat away at Granada. Lionel Messi was still not deemed fit enough to start the Granada vs Barcelona clash at Los Carmenes while Fati, the 16-year-old who has lit up La Liga in recent weeks, also began the game on the bench. But while both came on at half-time with Barcelona trailing to Ramon Azeez's opener, it was Granada that scored again, Alvaro Vadillo converting a penalty after Arturo Vidal was found guilty of a handball.

Barcelona have now won only two of their opening five league games and none away from Camp Nou, this their second loss already, just one fewer than the three they suffered during the entirety of last season.

With seven points on the board, this is their worst start to a season since 1994.

"Obviously I am worried," said coach Ernesto Valverde. "Because we are not getting good results and when that happens in two or three games, it means we are not playing well."

Instead, Granada go top of the table after capitalising on Atletico Madrid's goalless draw at home to Celta Vigo a few hours before.

They will stay there until Sunday, when Sevilla, Real Madrid or Athletic Bilbao could overtake them.

Barcelona are seventh in the La Liga table, grasping onto the consolation of Messi's second substitute appearance in five days that now suggests he has finally recovered from the niggling calf injury sustained at the start of August.

Their problems though are unlikely to be solved simply by their captain's return.

Junior Firpo's error two minutes into his first start for the club gifted Granada their opening goal and set the tone for a chaotic night in defence.

And up front, Antoine Griezmann was quiet again, with little in any of the combinations to suggest Ernesto Valverde has yet worked out who will form his best attacking trio and in what positions.

"In the end, the coach is responsible and I feel responsible," Valverde said. "I always think you can win or lose but at least you have to deserve to win when you lose, and today it hasn't been like that."

Firpo's mistake came early, as he shaped to play a long ball over the top back to his goalkeeper. Instead, the lively Roberto Soldado stole possession and slipped in Antonio Puertas.

With Firpo on the floor, Gerard Pique scrambled across but Puertas' shot only looped up off the defender to the back post where Azeez headed in.

Messi won a free-kick 30 yards out but hit it straight at the wall while Marc-Andre ter Stegen fumbled a cross and had to react quickly to claw it back off his own line.

Any hopes of a Barca comeback were dashed in the 66th minute as Vidal handballed at the end of a scramble in the box and Vadillo made no mistake with the spot-kick.

One break saw Messi supply Fati but the teenager took too long and then Messi tried himself but his shot was straight at the goalkeeper. In the end, Granada were comfortable winners.

Atletico could have returned to the top of La Liga but were frustrated by a determined Celta Vigo.

After coming from two goals down to salvage a point against Juventus in the Champions League on Wednesday, Atletico failed to sustain the momentum in a match of few chances at the Wanda Metropolitano.

Diego Simeone's side won their opening three league games but are now two without a victory, following last weekend's shock defeat away at Real Sociedad.

This latest setback leaves Simeone with familiar questions to answer about his side's attacking threat.

Summer signing Joao Felix started before being replaced by Alvaro Morata in the second half, the Spanish striker available again after recovering from a knee injury.

But neither Felix nor Morata, or their partner Diego Costa, could conjur up the decisive opening, with full-backs Renan Lodi and Kieran Trippier by far the team's most creative outlets.

Atletico drop to third in the table while Celta climb to 14th.