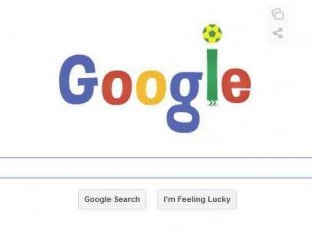 The 20th edition of the biggest global sporting event, FIFA World Cup 2014, is up and running with the excitement spreading all across the world like wildfire. Internet giants Google too have taken a plunge into the festivities of the tournament in the vibrant Brazil, with a new and unique google doodle around the tournament each day.

After embracing the tournament on June 12 with a dash of the Brazilian flag colours yellow and green, Google has now come up with an animated one with the letter 'l' of 'Google' bouncing a football on it's head.

Following the opening day that saw tournament favourites and hosts Brazil beat Croatia, the fans were treated to a mouth-watering display of football on Day 2 when Netherlands outclassed Spain 5-1.